Localization of the technology for overhauling the turbines of power plants, in cooperation between Arab Industrialization and the major French international companies

Home - news - Localization of the technology for overhauling the turbines of power plants, in cooperation between Arab Industrialization and the major French international companies

Localization of the technology for overhauling the turbines of power plants, in cooperation between Arab Industrialization and the major French international companies 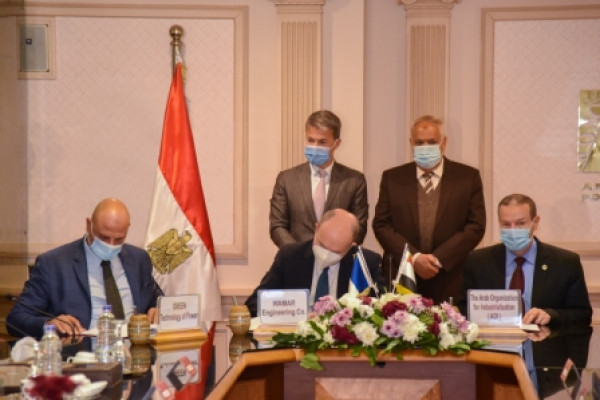 This came within the framework of the signing of the Memorandum of Understanding between the Arab Industrialization Company, "Wamar" for French Engineering and "Green Technology" Company, in the presence of Mr. Philippe Garcia, the Commercial Counselor of the French Embassy in Cairo.

The "Terrace" expressed his pride in cooperating with "Wamar" for French engineering, which is one of the largest international companies operating in the field of overhaul and maintenance of turbines of all kinds, pointing out that we aim to fully localize this technology in Egypt in a way that contributes to achieving a high added value for the national industry. As well as saving huge sums of hard currency.

Al-Terras explained that an agreement had been reached with the French company to transfer and localize the technology for carrying out overhauls, maintenance and deep repairs to gas and steam turbines in power plants.

He added that it was agreed to take advantage of the advanced technological capabilities of the engine plant to localize this modern technology for the first time in the national industry, pointing out that the French company had conducted a field study to identify the manufacturing capabilities of the factory and their conformity with international quality standards.

The "Terrace" stated that the agreement includes training and qualifying the human and technical cadres in the engine plant through specialized training programs in the field of overhaul and maintenance of turbines, indicating that the areas of cooperation aim to meet all the needs of the local market and national projects and expand in the future to African and Arab markets.

For his part, Mr. Philippe Garcia affirmed that the Egyptian market attracts French investments and is of strategic importance to the Arab and African region, pointing to the keenness of major French companies and French businessmen and their aspiration to transfer technology to Egyptian industrial enterprises and to participate in the implementation of major national projects.

The Commercial Counselor of the French Embassy in Cairo praised the pivotal role played by the Arab Organization for Industrialization to deepen local industrialization and localize technology in accordance with the standards of the Fourth Industrial Revolution and digital transformation.

For their part, senior officials of the French international company "Wamar" and "Green Technology" company praised the advanced manufacturing capabilities that they inspected during the field visit at the Arab Industrialization Units, in accordance with international quality standards, indicating the aspiration of Wamar International Company for Investment in Egypt and cooperation with Arab Manufacturing, noting that WAMAR company has strict requirements for quality, which are what are met by the Arab Organization for Industrialization.