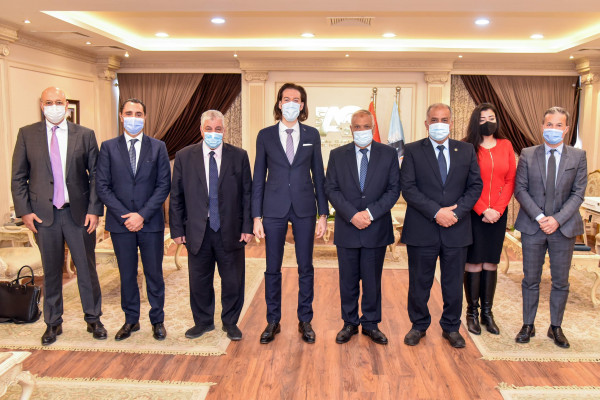 Lieutenant General Abdel Moneim El-Terras, Chairman of the Arab Organization for Industrialization, affirmed the implementation of the directives of President Abdel Fattah El-Sisi to continue the ongoing efforts to deepen and increase local manufacturing and localize the transport industry technology in Egypt in cooperation with major international companies, thus contributing to the comprehensive development of the railway and metro system and expansion in Intelligent transportation applications.

This came during the cooperation talks between Arab Industrial and the French international company Alstom.

During the meeting, the vision of the Arab Organization for Industrialization and its future plans regarding increasing the proportions of the local component, transferring and localizing technology in many areas of the railway and subway industry, and the expansion of smart transportation applications and modern digital technologies in manufacturing were presented.

In addition to discussing the executive position of a number of joint projects that are being implemented in railways, tractors, crossings, modernization of signs, as well as subway projects, including training of human cadres according to the latest training programs

In this regard, "The Terrace" praised the experiences of Alstom International, which is one of the largest international companies specialized in integrated transport systems, pointing out that Alstom has numerous projects in the major national development projects currently taking place in Egypt, as it is the entity responsible for implementing the Monorail project. And the development of signaling systems for all subway lines, and many other smart transportation projects.

As well as developing and modernizing the fleet of mobile units on the railways, including new tractors and vehicles, and expanding applications of smart transportation systems such as monorail and high-speed trains.

In a related context, "Al-Terras" explained that Arab Industrialization has developed a comprehensive plan for the modernization and development of the SEMAF Railway Missions Factory of the Arab Organization for Industrialization, which is currently being used by major international companies, according to a vision that seeks to cover all the demands of the Ministry of Transport from the various railroad cars and the subway, And expansion in foreign markets, especially the African and Arab region, explaining that we aim to increase the annual production rates of the factory, expand smart transportation applications, develop the research and design sector, raise the level of technical personnel and train them externally and internally in cooperation with specialized international expertise.

For his part, Mr. Andrew Delioni, CEO of the French company Alstom in Africa, the Middle East and Central Asia, said that the Egyptian market is large, promising and attracting international investments, indicating that the company is looking forward to participating in all the major national projects in Egypt.

Dilioni also stressed the importance of strengthening cooperation and partnership with Arab Industrial for the transfer and localization of modern digital technology to develop and modernize railways, subways and smart transportation applications, pointing to enhancing internal and external marketing opportunities to meet the growing needs of the local market and the African and Arab regions.