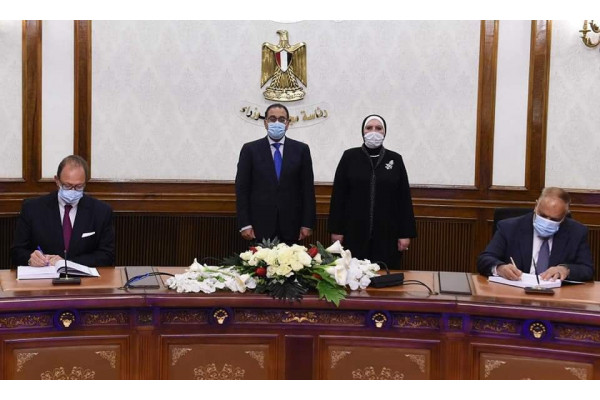 Dr. Mustafa Madbouly, Prime Minister, today, at the cabinet headquarters, witnessed the signing of a partnership contract between the Arab Organization for Industrialization and the German "DMG Mori" company; To establish a factory for the production of CNC programmed automatic control machines in Egypt, in the presence of Nevin Jama, Minister of Trade and Industry.

The establishment of the CNC machine-production plant, which is the first of its kind on the African continent, comes within the framework of what was agreed upon during a meeting of President Abdel Fattah El-Sisi, President of the Republic, with company officials.

After the signing, Lieutenant General Abdel Moneim Al-Terras explained that the past years witnessed cooperation between the company and a number of bodies, including the Ministries of Transport and Military Production, the Arab Organization for Industrialization, the business sector, and the private sector, and there were many areas of cooperation with the company such as: medical industries, the pump project, and the development of a factory Semaph, for the development and modernization of the railways.

Lieutenant General Abdel Moneim El-Terras indicated that the partnership contract, which was signed today, is the culmination of this cooperation between the Arab Organization for Industrialization and the company. Where the company "DMG Morey" - a joint stock company, is investing through cooperation with the authority in a fully automated and highly programmed factory to produce turning and milling equipment on an area of ​​about 60,000 square meters within the headquarters of the Arab Organization for Industrialization, and it is the first smart factory of its kind in Egypt and Africa, and it is scheduled to officially open during 2023.

This factory provides all capabilities for comprehensive technical solutions, which include flexible automation, full digital transformation, and advanced flow aggregation, through the use of automated guided vehicle transport systems, production is linked to the annual capacity of more than 1000 machines, in addition to industrial digitization services for factories as well as the establishment of an academy for training. On that equipment.

For his part, "Christian Tonis", Chairman of the Executive Board of the company, said: In recent years, thanks to the efforts of President Abdel Fattah El-Sisi, President of the Arab Republic of Egypt, the Egyptian economy has improved and the country has opened up to more new growth opportunities, and Egypt has an economy with promising potential. For investment, pointing out that the partnership contract relates to the establishment of the first factory to manufacture CNC machines and equipment, and production requirements, in accordance with the standards of the Fourth Industrial Revolution, indicating that with this step Egypt will become a center for industries in the African and Arab region, and the establishment of this factory aims to localize The technology of manufacturing CNC digital automatic control machines, in addition to training and qualifying human cadres, and achieving a great paradigm shift for the Egyptian industry.

He added: "The time has come for the African continent to flourish, and Egypt is the front for the continent of Africa. It is a continent full of potential and is characterized by an increase in demand for future technologies. By establishing our smart factory, we seek to transfer technology in an open, honest and comprehensive manner, as well as to promote industrial transformation in this country, in addition to that." We are creating new job opportunities suitable for the future and providing impressive opportunities for education. "

The DMG Morey Academy will open a new training site at the new factory. To contribute to German education in the education of qualified youth working in Egypt, as well as to offer training courses on a large scale in Egyptian schools and universities; With the aim of preparing the enthusiastic youth for the modern work environment, as well as contributing to the modernization of industrial education under the auspices of President Sisi.

He said: On the basis that modern industrial education is the basis for prospering economic growth, the company provides good prospects for young people through targeted training and additional education programs for the manufacturing industry, and therefore the academy will provide modern training courses for programming digital-controlled operating machines in the new production plant.