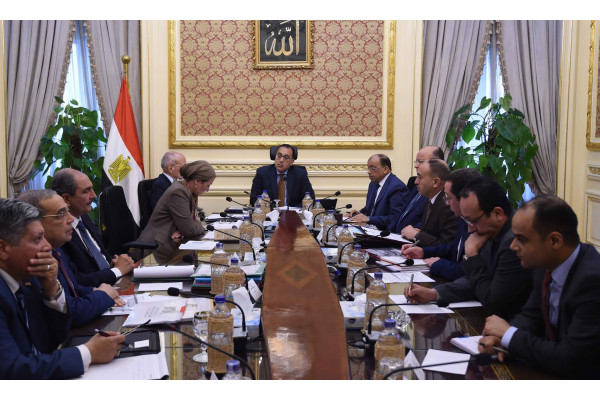 Dr. Mustafa Madbouly, Prime Minister, chaired a meeting, to follow up the executive position of the new municipal solid waste system, in the presence of Dr. Mohamed Al-Assar, Minister of Military Production, Major General Mahmoud Shaarawy, Minister of Local Development, Dr. Yasmine Fouad, Minister of Environment, and Major General Khaled Abdel-Al, The Governor of Cairo, and Major General Mohamed Morsi, Director General of the Arab Organization for Industrialization, in addition to officials of a number of relevant authorities.

At the beginning of the meeting, the Prime Minister stressed the importance of the citizen in the various governorates feeling a qualitative shift in the hygiene file, indicating that the state has provided the necessary capabilities, as well as funding, and we will follow the different stages of implementation until there is a noticeable improvement in the hygiene file.

During the meeting, Dr. Yasmin Fouad, Minister of Environment, gave a presentation on the executive measures that were taken in implementation of the President’s assignments regarding the general framework of the implementation plan for the new municipal solid waste system, in relation to infrastructure, and follow-up of the position regarding contracts for operating collection, transport and street cleaning In Cairo Governorate, as well as contracts for treatment and final disposal of waste, as well as a follow-up to the latest developments related to the study of standards for sanitary landfills, carried out by a committee formed by the ministries of environment and local development and a group of officials of Hat concerned.

During the presentation, the Minister of Environment also referred to the recently launched national media campaign under the auspices of the President of the Republic, entitled "Bring Green", which aims to spread and increase environmental awareness, in a way that contributes to preserving the environment.

For his part, Major General Mahmoud Shaarawy, Minister of Local Development, pointed out during the meeting to the programs of the solid waste management system (2019-2023), explaining that regarding the executive position of the infrastructure development program during the year 2019-2020, 15 fixed intermediate stations were established in 7 governorates, and 7 other mobile in three governorates, this is in addition to the establishment of 26 sanitary burial cells in 17 governorates, the establishment of three new lines in three governorates for recycling and treatment of waste, while raising the efficiency of 6 existing lines, as well as raising accumulations from 38 locations in 7 governorates. The amount of accumulations that have been raised so far to 365 thousand tons, and is being completed.

The Minister of Local Development also presented the institutional framework of the executive unit for waste management, noting that it aims to play the role of the implementer to complete the infrastructure of the system, and address the lack of financing, investment and planning capabilities and contractual powers of the governorates, as well as building the capacities of the departments concerned in the governorates so that they have the necessary capabilities to do the work The executive unit and management of the waste sector after the end of its work.

The Minister reviewed the terms of reference of the executive unit for the waste sector management, which includes preparing the executive plan for projects in the light of the national strategy for integrated waste management and the master plans of the governorates, and presenting them to the Ministerial Committee, and publishing the proposal for model contracts for the system stages of collection, transport, treatment and safe disposal, which includes Specifications and standards prepared by the Ministry of Environment in coordination with the Ministry of Local Development, after approval of the Ministerial Committee.

Its terms of reference also include receiving reports from sub-unit managers at the governorate level for study and evaluation, receiving performance reports and technical, financial and other needs and presenting problems received from sub-units in the governorates to the Ministerial Committee, as well as presenting the plan implementation proposal, and the type and size of contracts and projects required and its geographical scope are determined And presented to the ministerial committee.

The competencies also include coordination and cooperation with international financing agencies to provide technical support, training and financing in the field of solid waste management and showcase the best available techniques in this field, as well as to discuss problems and provide support and guidance necessary to ensure the consistency of the ministries' plans with the goals of the executive plan and to ensure compliance with timelines and work plans In addition to reviewing the technical reports for evaluating project performance, identifying deviations in implementation, and proposing solutions and interventions to improve the performance of the waste system.

On the competencies of the sub-unit for waste management in the governorates, the Minister of Local Development explained that it includes monitoring, collecting, analyzing and updating data related to the current status of the quantities and types of waste generated and the quantities currently being recycled and treated and final disposal in addition to studying the capabilities of the governorate and presenting it to the central unit, as well as coordination to determine the needs on The governorate level in terms of technical and equipment required to implement the solid waste system and coordination at the governorate level to provide those needs and present them to the central unit.