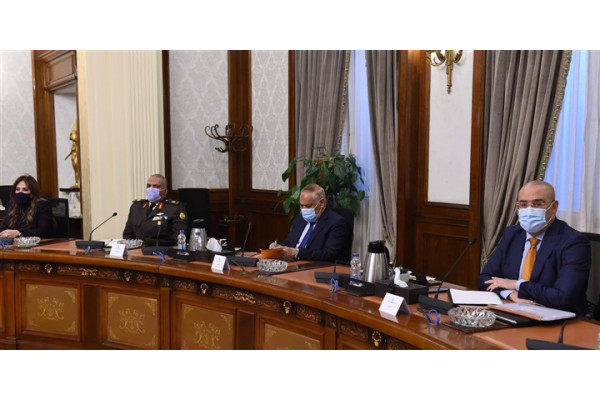 The meeting was attended by 11 ministers, who are: Electricity and Renewable Energy, Petroleum and Mineral Resources, Education, Technical Education, Planning and Economic Development, Finance, Local Development, Communications and Information Technology, Housing, Utilities and Urban Communities, Social Solidarity, The State for Military Production, and the two heads of the Arab Organization for Industrialization And the Engineering Authority of the Armed Forces, in addition to the participation of the Minister of Interior, and officials of the relevant ministries via video conference technology.

At the beginning of the meeting, the Prime Minister indicated that this giant project was detailed during the presidential inaugurations in Port Said early this week, stressing that President Abdel Fattah El-Sisi, President of the Republic, had mandated the government to place this great national project at the top of its concerns.

Dr. Mostafa Madbouly added: We know that this project faces great challenges. Due to the difference in the nature of each of the governorates of the Republic from the other, so the success of this project requires diligent follow-up from all of us, as all members of the government will participate in its implementation, and the implementation process will be directly under the supervision of the Council of Ministers, and for this, a weekly periodic meeting will be held to follow up on its executive position.

The Prime Minister explained that the implementation of construction works for projects in the governorates will be through the Ministry of Housing, by taking over a number of specific centers, as well as the Engineering Authority for the Armed Forces through assuming responsibility for a number of other centers, and he stressed that any obstacles will be overcome and all procedures will be facilitated in order to accelerate rates The implementation of the various works in this huge national project, indicating that there are mandates for all governors to fully cooperate and coordinate in order to facilitate the necessary procedures to implement the various actions.

The Prime Minister pointed out that there is a mandate from President Al-Sisi to centralize the purchase of all the tasks and equipment required in the projects that will be implemented, and for this the process of counting all the equipment required for contracting with the supplier companies is carried out according to each stage, taking into account that they are supplied in full of manufactured products. locally.

Dr. Mustafa Madbouly also instructed Major General Mahmoud Shaarawi, Minister of Local Development, to compile a list of local contracting companies in each governorate, and to hand it over to the Ministry of Housing and the Armed Forces Engineering Authority. In order to be used in the projects that will be implemented.

During the meeting, Engineer Randa Al-Minshawi, First Assistant to the Prime Minister, presented the initial inventory of the targeted projects, which included a specific list of about 50 centers nationwide, which will be covered within the projects of the first phase of the initiative, noting that the projects are reviewed by the Urban Planning Commission for approval by the ministries Central and Main Committee and start implementation procedures.

Al-Minshawi added that the Ministry of Housing has prepared an inventory of drinking water and sanitation projects for the centers assigned to the ministry with 24 centers, with the required pumps specified, and the National Authority for Drinking Water and Sanitation has also monitored the sanitation service position in the centers assigned to the Engineering Authority and the cost of the works required to cover villages with drainage is being determined. Health.

The First Assistant Prime Minister explained that a study was prepared for the required construction work in the centers of Sahel Salim and Abu Qurqas with the knowledge of the reconstruction authority, and preparations are underway to start their implementation, in addition to the start of sanitation projects, and letters were sent to the targeted centers to the Ministry of Health and it was agreed to send field teams to monitor the situation Existing health facilities, studying needs, and determining the required projects according to the requirements of the comprehensive health insurance system, pointing out that coordination has been made with the Systems Department of the Armed Forces to design a "application" to follow up the initiative in detail, including all the details of the planned projects, as part of the participatory applications for the transition to The new administrative capital.

Eng. Randa Al-Minshawi presented to the meeting of the Main Committee today the decisions issued by the meetings of the sub-committees, noting that the Ministry of Housing and the Engineering Authority have coordinated to prepare a unified model for the facilities that will be implemented in the targeted centers within the first phase of the "Decent Life" initiative, such as schools, youth centers, and establishments. Service, and others, to reach a unified pattern in all villages, with setting a specific timeline for all planned work in the centers.

Al-Minshawi indicated that the Ministry of Planning will coordinate with businessmen, banks, and civil society organizations, to unify the efforts of donations within the initiative and direct it to ensure the best use of it.

She confirmed that the Ministry of Housing had prepared a study to operate and maintain the use of cars to clear sewage from small gatherings, in order to provide job opportunities for the people of the villages, and that all parties had prepared an inventory of the needs required within the initiative, which could be manufactured locally, in preparation for coordination with the Ministry of Military Production and the Arab Organization for Industrialization to study the possibility of Supplying the required equipment and supplies according to the implementation timeline.