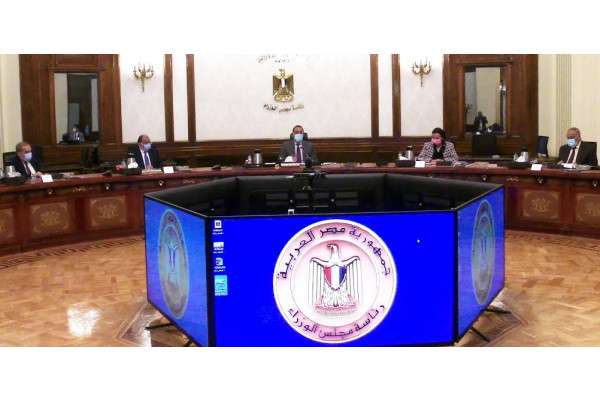 Dr. Mustafa Madbouly, Prime Minister, held a meeting to follow up the executive position of the new municipal solid waste system, as well as the position on projects to convert municipal waste into energy, in the presence of Major General Mahmoud Sharawi, Minister of Local Development, Dr. Yasmine Fouad, Minister of Environment, and Engineer Mohamed Ahmed Morsi, Minister of State for Military Production, Lieutenant General Abdel Moneim Al-Terras, Chairman of the Arab Organization for Industrialization, officials of the concerned authorities, and a number of investors and officials of companies operating in this field.

At the outset of the meeting, the Prime Minister stressed the importance of integrating roles and responsibilities among the bodies working to implement and manage the new solid waste system. In pursuit of its objectives, and to accelerate the completion of the projects that are implemented in order to reach an integrated system for dealing with solid waste that ends the phenomenon of random landfills, with all the serious environmental and health damages they cause, so that their substitute will be factories equipped to recycle and benefit from the waste.

Counselor Nader Saad, spokesperson for the Presidency of the Council of Ministers, said that the meeting dealt with a review of the position of implementing the first phase of the new waste system during the fiscal year 2019/2020, which includes the implementation of work to remove accumulations in 38 sites in 8 governorates, and the establishment of intermediate stations that include 15 fixed stations. In 7 governorates, and 7 mobile stations in 3 other governorates, in addition to establishing 27 burial cells in 18 governorates, and strengthening waste recycling factories by raising the efficiency of 6 lines in Gharbia Governorate, and implementing 3 new lines in 3 governorates.

The Spokesman stated that the works carried out so far included raising the accumulations of quantities of up to 402 thousand tons of waste, out of 447 thousand tons targeted, in 4 governorates: Beheira, Sharkia, Aswan and Gharbia, and 4 fixed intermediate stations have been completed, including 3 stations. In Cairo and a station in Beni Suef, all the equipment of the intermediate stations in the first phase was 100% procured, and with regard to the mobile intermediate stations, the supply of the mobile stations has been completed and the equipment is being delivered, with 4 stations in Cairo, one in Damietta, and two in Ismailia.

Counselor Nader Saad stated that the presentations that were reviewed during the meeting indicated that 17 health burial cells were started in 12 governorates out of 27 to be implemented within the first phase, and 3 new production lines were established in factories for recycling waste, and it was agreed to develop The factories of Mahalla al-Kubra and Diffra in Gharbia governorate, and the establishment of a new line at the Mahalla al-Kubra plant to reach the total capacity of the plant to 640 tons / day, with the establishment of two lines at the Diffra factory with a capacity of 1,200 tons / day, and he explained that the governorates witnessed the lifting of 40 million tons of waste, of which 13 million tons of waste Historic, during the period from July 2019 until December 2020, and the period from March 18 to November 30, 2020 alone witnessed the removal of 15.7 million tons of waste.

The meeting also dealt with the situation of projects to convert municipal waste into energy, where Dr. Yasmine Fouad, Minister of Environment, presented the first phase of waste-to-energy projects that Egypt is starting for the first time, as the minister confirmed that it is a qualitative leap for Egypt in the field of dealing with waste and the stage has begun. Preparation for it with the update and development of the integrated management plan for the municipal solid waste system in 2018 to become a national strategy for waste, where the quantities of waste destined for treatment and recycling were determined to reduce the quantities of final waste required for safe disposal, so the percentage of waste recycling for fuel production was 60% and 20% for treatment by energy conversion Electricity from a total of 5.25 million tons of waste collected annually.