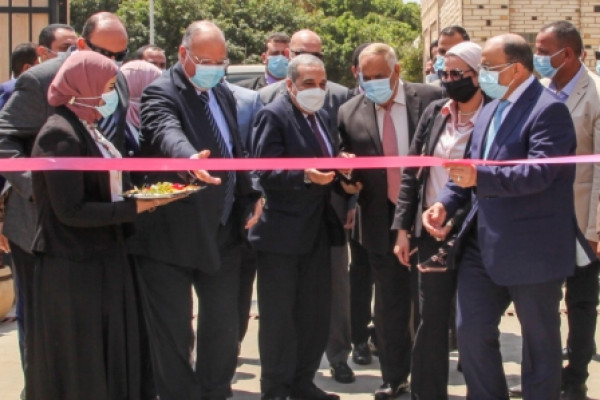 Within the framework of implementing the directives of the President of the Republic and the mandates of the Prime Minister to implement the new system for managing municipal solid waste in various governorates.

The opening was attended by Engineer Jihan Abdel Moneim, Deputy Governor for the Southern Region

And Major General Ihab El Sharshaby, head of the Cairo Cleaning and Beautification Authority, and leaders of the Ministry of Local Development, Environment and Military Production.

After that, the Ministers of Local Development, Environment and Military Production, the President of the Arab Organization for Industrialization, and the Governor of Cairo inspected the queuing of the equipment of the Cleaning and Beautification Authority located in a garage next to the station, for which maintenance was carried out within the program funded by the Ministry of Local Development to repair the waste system equipment in various governorates, with a value of 400 million pounds.

Major General Mahmoud Shaarawy confirmed that the opening of the station and the repair of equipment comes within the framework of implementing the directives of the political leadership to implement the first program for the infrastructure of the waste system, indicating that about 200 million pounds have been allocated to Cairo Governorate for the projects of the first phase of the system, which includes the establishment and operation of fixed and mobile intermediate stations. And the purchase of new equipment and machinery, stressing the Ministry's endeavor to raise the efficiency of transportation and waste collection operations to improve the level of hygiene and preserve the health of citizens.

The Minister of Local Development stressed the importance of good follow-up to the process of using the new equipment, as well as the maintenance of which the governorates received during the last period to ensure its good management and operation to make good use of it.

For her part, Dr. Yasmine Fouad, Minister of Environment, confirmed that the opening of the station is a new step in the infrastructure work of the waste system, within the planning, regulatory and control role of the Ministry of Environment in the new waste management system, and also the role of the waste management organization according to Law 202 of 2020, which aims to regulate and follow up And monitoring all processes related to waste management at the central and local level in order to achieve the improvement of the safe management of all kinds of waste, and to overcome current and future challenges.

For his part, Eng. Mohamed Ahmed Morsi, Minister of State for Military Production, expressed his happiness to participate in the opening of the station, stressing that the establishment of this station is one of the good examples that reflects integration and cooperation between the various partners in charge of implementing the new waste management system in order to accomplish the work in a way that serves the interest of the citizen. And work to speed up disposal of waste in order to preserve the health of citizens and preserve the environment.

Minister Morsi added that the new solid waste management system is based mainly on developing and equipping the necessary infrastructure at the level of all governorates, praising the establishment of such stations that contribute to the continuous disposal of waste and its non-accumulation and raising the efficiency and level of hygiene in a way that leads to protecting the environment from pollution. By making the best use of the available resources.

On his part, Lieutenant General Abdel Moneim Al-Terras, Chairman of the Arab Organization for Industrialization, emphasized the implementation of the directives of President Abdel Fattah El-Sisi regarding raising the efficiency of the waste system and its safe disposal, and taking measures to preserve the environment, through a new system for integrated waste management.

The "Terrace" pointed out that the experiences of developed countries in this regard were reviewed, to get acquainted with the latest technologies and methods, explaining that the role of Arab Industrialization is in the architectural design of the unloading berth, the perimeter and the houses of the fixed handling station in the Mokattam area, and the supply and installation of (2) preparations for the collection of waste. From small vehicles to large vehicles without human intervention, as well as supplying and installing a truck scale with a load of 120 tons, in addition to supplying (9) tipper trucks with a load of 40 cubic meters and supplying a loader's capacity of a ram of 1.3 cubic meters.

He added that an air compressor and a washbasin were supplied for the daily maintenance of the station and equipment and the supply of an electric generator with a capacity of 10 kilowatts, stressing the deepening of the local manufacturing of many equipment by taking advantage of advanced global experiences in this field, taking into account the design of the system in a way that takes into account all environmental conditions and civilized appearance.

Major General Khaled Abdel Aal, Governor of Cairo, confirmed that the implementation of the handling station comes within the framework of President Abdel Fattah El-Sisi's directives to raise the efficiency of the municipal waste system and to overcome the problem of accumulation of waste and its safe disposal, indicating that the handling station was implemented in cooperation with the ministries of local development, environment, planning and the Arab Authority. The area of ​​the handling plant is 5040 square meters, with a capacity of 3500 tons / day, and the governorate has implemented construction and civil works at an estimated cost of EGP 17.5 million, and mechanical and electrical works have been implemented through the Arab Organization for Industrialization at a total cost of 1.75 million pounds.

The Arab Organization for Industrialization has delivered the Cairo Cleaning and Beautification Authority to the station cars and equipment, which cost about 29 million pounds and include 9 Renault tractor heads + a 40 m3 rear tipper semi-trailer, 1 caterpillar loader, bucket capacity 1 m3, and a washing unit + compressor capacity 500 liters, and a 10-kilowatt generator, and the Arab Organization for Industrialization has trained the Cleanliness Authority drivers on new cars and equipment.