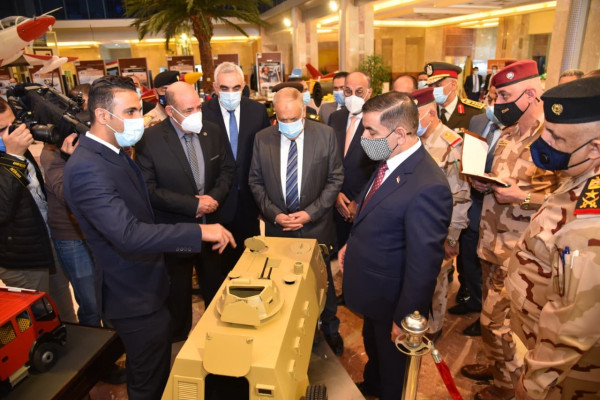 Lt. Gen. Abdel Moneim Al-Terras, Chairman of the Arab Organization for Industrialization, received today, Lt. Gen. Jumah Inad Saadoun, Minister of Defense of the sisterly Republic of Iraq, who is on an official visit at the head of a high-ranking military delegation, in the presence of Ambassador Dr. Ahmed Nayef Rashid, the Iraqi ambassador in Cairo.

This visit comes in light of the directives of President "Abdel Fattah Al-Sisi" to open new horizons of cooperation and integration with the Arab brothers. And also within the framework of the constants of the Egyptian policy towards brotherly Iraq, with its full support to overcome all the challenges facing it, in order to help it strengthen its national institutions, maintain its security and stability, and achieve progress and prosperity for its brotherly people.

from his side; The Iraqi Minister of Defense expressed his country’s aspiration to strengthen cooperation frameworks with Egypt, especially after its success under the leadership of President "Sisi" in becoming an inspiring model to follow in a region suffering from crises and turmoil, despite the enormous challenges imposed by these pressing circumstances.

During his inspection of the exhibition of the products of Arabia for industrialization, the staff member "gathered by Saadoun's stubbornness" affirmed his country's keenness to strengthen partnership and cooperation relations with Egypt as a leading country in the Arab nation, praising the industrial and technical capabilities of the authority and the richness and diversity of its defense and civil products, and the modernization of production lines according to the latest digital transformation and artificial intelligence Modern.

The Iraqi Minister of Defense praised the positive role of Arabia for industrialization and its shiny imprint in many important development and strategic projects in the Arab region.

During his inspection of the production lines in the factories of the Arab Organization for Industrialization, he praised the extent of the development of armament technology with the defense equipment produced by the authority, the capabilities and the manufacturing and technological capabilities and the human cadres trained according to the latest modern training systems.

He added that his country is looking forward to the Arab Industrialization’s participation in the development and reconstruction projects currently taking place in Iraq, especially in the fields of defense industries, renewable energy, armored vehicles, communications, electronics, digital transformation, infrastructure, drinking water purification plants, sewage, LED bulbs, water and energy rationalization and other areas of development, indicating that He studied with officials of the Arab Organization for Industrialization the possibility of opening a market in the State of Iraq for the organization’s distinguished products in various developmental fields.

On his part, Lieutenant General "The Terrace" indicated that this visit with this momentum reflects the depth of ties between Egypt and the sisterly State of Iraq, stressing the interest of President "Abdel Fattah El-Sisi" to achieve Arab integration in the various development and defense industries and their development in accordance with the latest technological technologies.

The "Terrace" mentioned that aspects of cooperation between the two sides in the field of various defense and security industries and methods of strengthening them were reviewed, pointing to the importance of training in many fields and qualifying technical personnel in the Republic of Iraq in factories and training centers in Arabic for industrialization.

He added that an invitation was directed to the Iraqi delegation to form a technical team to visit the units of the Arab Organization for Industrialization, to see the capabilities available on the ground and to identify the proposed aspects of cooperation between the two sides in the various fields of industrialization.

For his part, the Iraqi ambassador clarified that Egypt is the elder sister, and the roots of the historical relations between the two brotherly countries extend deep into history, stressing that Iraq is always looking forward to more relations with brotherly Egypt.

He indicated to the Iraqi side's keenness to develop bilateral relations and to discuss long-term joint partnerships with Arab Industrialization, in all areas of industry, training of human cadres and participation in implementing development projects in the State of Iraq in accordance with international quality standards, expressing his wishes for the Egyptian people more progress and prosperity.a