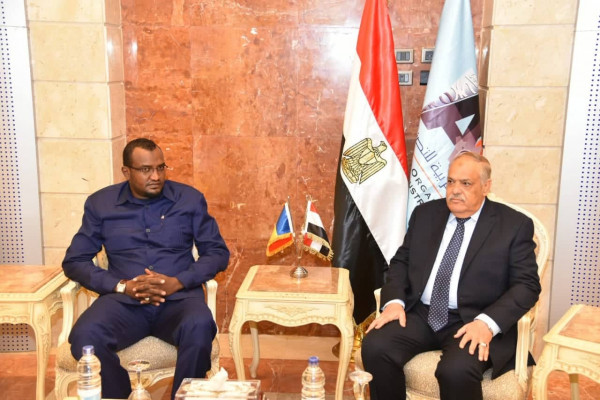 Lieutenant "Abdel Moneim El-Terras," Chairman of the Arab Organization for Industrialization, received , Lieutenant "Mohamed Aba Ali Salah", Minister of Defense and Security of the Republic of Chad, who is making an official visit to the country at the head of a security delegation from his senior aides, in the presence of Dr. "Al-Amin Al-Doudou Abdullah", Ambassador of the Republic of Chad in Cairo .
This visit comes in light of the state’s strategy to open up to Africa and President Abdel Fattah El Sisi’s directives to open new horizons of cooperation and integration to achieve the hopes and aspirations of our African people.
During the meeting, aspects of cooperation between the two sides in the field of various defense and security industries and methods of strengthening them were reviewed and benefiting from the advanced capabilities of the Arab Organization for Industrialization to meet the needs of development projects in the sister Republic of Chad.

"Mohamed Aba Ali Salah," stressed his country's keenness to enhance partnership and cooperation relations with Egypt as a leading country in the African continent and its presidency of the African Union, praising Egypt's development renaissance and its unprecedented steps for digital transformation, and praised President Sisi’s initiative to support the Egyptian-African partnership in all development fields. .
The Chadian Minister of Defense and Security praised the positive role of the Arab Organization for Industrialization and its shining fingerprints in many important development and strategic projects in the African continent, pointing to his country's aspiration for Arab Industrialization to participate in development projects in Chad, especially in the fields of defense industries, armored vehicles, communications, electronics, digital transformation, renewable energy and water purification plants Drinking, sanitation, LED bulbs, water and energy rationalization and other areas of development.
He added that a study was opened to open a market for Egyptian products in the country of Chad, especially the distinguished Arab Organization for Industrialization products in various developmental fields, as an important step in the path of constructive cooperation between the countries of the continent.
For his part, Lieutenant , "The Terrace," indicated that this visit with this momentum reflects the depth of ties between Egypt and all African countries, based on the principles of the Egyptian foreign policy that is keen on the importance of building bridges of rapprochement and cooperation between the countries of the continent and restoring warmth in many areas in a way that meets The aspirations of the people of the African continent, as well as supporting the pillars of security and stability for the African continent.
He added that the Arab Organization for Industrialization puts all its capabilities and technical and technological expertise to serve our African continent, pointing to discussing participation in development projects and meeting the needs of our brothers in the country of Chad, especially in light of the formation of an Egyptian alliance from the authority and some national and international companies to work to transfer the Egyptian development experience to all parts of our continent The brown.
He added that we also agreed to participate in infrastructure projects, digitization, electronic archiving, exchange of visits and the formation of a technical committee to study the available capabilities and needs and set time plans for implementation, stressing the importance of training in multiple fields and qualifying technical cadres in the Republic of Chad in the factories of the Arab Organization for Industrialization.
After the end of the joint talks, the head of the Arab Organization for Industrialization and the Minister of Defense and Security of Chad visited an exhibition of the defense and civil authority's products, where the Chadian minister praised the authority's efforts to deepen local industrialization, indicating that he hopes that this visit will result in constructive and integrated technology cooperation between Chad and Egyptian minds and expertise in Arabic for industrialization In all fields in order to overcome the common challenges facing the countries of the African continent.