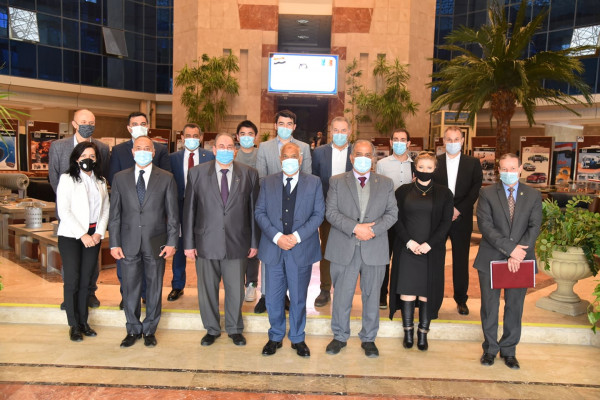 During the meeting, the Arab Industrialization vision was presented on deepening local industrialization, transferring and localizing technology in many different fields of industry, including training of human cadres, especially since there is a distinguished and historical cooperation between the Arab Organization for Industrialization and major Romanian companies in many areas of industry.

In this regard, the "Terrace" stressed the importance of implementing President Abdel Fattah El-Sisi's directives to localize technology in cooperation with international expertise, noting the importance of investing in the depth and strength of relations between "Cairo and Bucharest" through the Egyptian-Romanian Committee and how to benefit from them to open new horizons for joint cooperation in the fields of Different manufacturing.

The "Terrace" clarified that the latest developments in the areas of cooperation recently agreed upon between the Arab Company for Industrialization and a large Romanian company delegation were discussed, especially in the fields of defense industries, electronics, digital transformation, electric cars, the replacement of cars to work with clean energies and agricultural tractors, referring to the participation of Romanian companies in national projects. Which is implemented by the state, including furnishing government headquarters in the new administrative capital.

He added that the Arab Organization for Industrialization is looking forward to strengthening joint cooperation with major Romanian companies and increasing competitive opportunities to market joint production in the Egyptian, Arab and African markets.

For his part, the Romanian ambassador affirmed that the recent successes achieved by Egypt in all fields have attracted the attention of giant international companies, including the Romanians, to enhance joint cooperation in light of the improvement in the investment climate and the security and economic stability that Egypt currently enjoys, praising the administrative capital and the size of the national achievements and projects it witnesses under the chairmanship of the President "Abdel Fattah Sisi".

Mihai Stefan Stubaru praised the industrial and technical capabilities of the authority and the richness and diversity of its defense and civil products, which encourages many Romanian companies to conclude more partnerships with Arab Industrialization to deepen industrialization in areas of common interest.