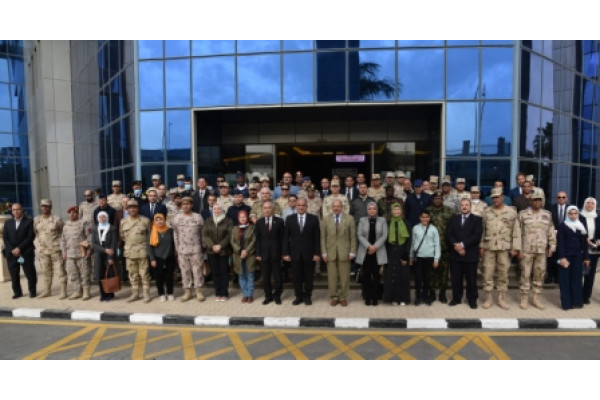 Lt. Gen. Abdel Moneim El-Terras, Chairman of the Arab Organization for Industrialization, welcomed the visit of the delegation of Nasser Higher Military Academy, appreciating the important role that the Academy plays in rehabilitating, developing and raising the capabilities of its students and providing them with many skills in order to prepare graduates with a high level of competence and distinction in specializations Diverse and different, praising at the same time the strong ties that bind the two institutions.

The "Terrace" praised the Nasser Higher Military Academy and its effective role in preparing and qualifying distinguished cadres, whether commanders and officers of the armed forces and civilian workers in the country, to occupy top jobs at the national level or for expatriates from Arab and African countries in various military, strategic, political and social sciences.

This came on the sidelines of the visit of a delegation from the Nasser Higher Military Academy, which included a number of military and civilian scholars, and sister countries.

This visit comes within the framework of continuous communication between Arab Industrialization and Nasser Academy, where the visits take place on an annual basis, with the aim of informing students from Egypt and all sister countries about the Authority's activities and the efforts it is doing to deepen local manufacturing and localize modern technology, as well as to support and adopt the implementation of innovations Industrial applicable.

Eng. Abdul Rahman Abdul Azim Othman, Director General of the Arab Organization for Industrialization, was keen to open an open dialogue with the scholars at Nasser Academy, where he indicated that Arab Industrialization is one of the castles of industry thanks to the efforts of its sons throughout the generations, referring to the date of the establishment of the organization and its national role as one of the results The victories of the October War, and its role in meeting the needs of Arab and African brothers from the defense and civil industries, as well as its plan to train human cadres, deepen local manufacturing, transfer and localize modern technology in partnership with major international companies in many areas of industry, including defense industries, armored vehicles, renewable energy, communications, electronics and tablets. And digital transformation, medical industries, drinking water purification plants and sewage, smart electric transport projects, railways, cars, LED bulbs, water and energy rationing, office furniture and other comprehensive development areas.

During inspecting the exhibition of the products of the Arab Organization for Industrialization, the delegation of Nasser Academy expressed their admiration for the various products of the Organization and its manufacturing capabilities to develop technology by scientific methods to achieve the highest rates of local manufacturing, transfer and localization of technology in cooperation with international expertise.

, The Academy delegation also went for a field visit to inspect a number of the authority’s units, where they inspected the production lines, which are no less than their counterparts in the most modern factories in the world, and were informed of the future plans undertaken by the Arab Company for Industrialization to support the state’s plan for digitization and modernization of production lines according to the standards of the Fourth Industrial Revolution.