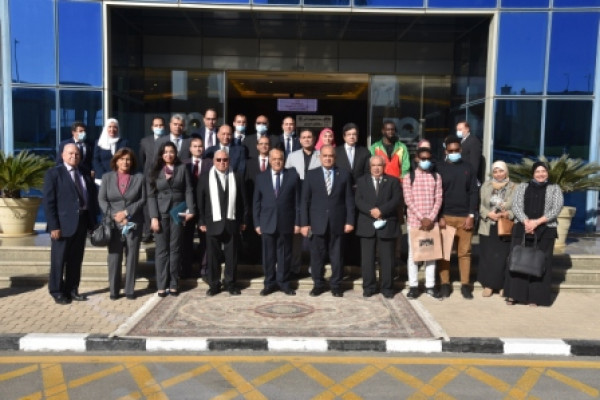 Lieutenant-General Abdel Moneim El-Terras, head of the Arab Organization for Industrialization, emphasized the importance of implementing the mandates of President Abdel-Fattah El-Sisi to open new horizons of cooperation and integration with African brothers, and strengthening the role of African youth to assume leadership and executive positions.

This came within the framework of the visit of the delegation of the Crescent Center for African Studies, accompanied by a number of personalities from several African countries, namely South Sudan, Eritrea and Ethiopia.

The "Terrace" expressed his pride in this visit, considering it an opportunity to support relations between Egypt and its African brothers, and to enhance the true image of the Egyptian industry potentials, stressing that Arab Industrialization welcomes students from African youth for training in its production units, and opens its doors to similar visits in order to support integration and joint cooperation. And exchange experiences to serve our African continent.

The meeting dealt with reviewing the history of the establishment of the Arab Organization for Industrialization and its national role as one of the results of the victories of the October War, and its role in meeting the needs of Arab and African brothers from the defense and civil industries, and referring to the Arab Industrialization Plan to train human cadres, deepen local manufacturing, transfer and localize modern technology in partnership with major international companies in Many areas of industry, including defense industries, armored vehicles, renewable energy, communications, electronics, tablets, digital transformation, medical industries, drinking water purification and sewage plants, smart electric transport projects, railways, cars, LED bulbs, water and energy rationing, office furniture and other comprehensive development areas.

Lieutenant General "Abdel Moneim El-Terras" was keen to open an open dialogue with the African brothers, in which he indicated that Arab Industrialization is one of the castles of industry thanks to the efforts of its sons throughout the generations, stressing that the Authority puts all its experiences and human and technological capabilities for cooperation and partnership with our brothers in the African continent, exchange of experiences and training African brothers in many areas of industrialization, especially in light of the formation of an Egyptian alliance from the authority and some national and international companies to work on transferring the Egyptian development experience to all parts of our brown continent.

He added that the Arab Organization for Industrialization supports renewable energy projects in the countries of the African continent, during the Egyptian Initiative for Development in the Nile Basin countries, pointing to the authority's keenness to establish stations operating under the photovoltaic cell system, exchanging experiences and training technical workers in African countries on maintenance and continuous follow-up.

He also pointed out the importance of providing all forms of support, rehabilitation and training to African youth and empowering them in leadership positions and benefiting from their capabilities, pointing out that the Arab Industrialization has a long and strong record of cooperation with the countries of the African continent, especially during the past recent years, which represent the fruit of the interest of the Egyptian political leadership and its eagerness to return Relations with Africa to a previous state.

After inspecting the exhibition of the products of the Arab Organization for Industrialization, the African delegation went to inspect a number of the Authority’s units, including the Arab Renewable Energy Company, where they inspected the solar station and saw the latest production lines for solar panels and wind power tower blades, which are no less than similar ones in the latest factories in the world, and they also inspected production lines In the electronics factory, for electronic screens, tablets and computers.

At the conclusion of the tour, the African delegation visited the Training Academy at the Arab Organization for Industrialization, through which the human cadres are trained and qualified through specialized training courses in all fields of industry and administration according to the latest training systems.

In this context, the African delegation expressed their admiration for the authority’s various products and its manufacturing capabilities to develop technology using scientific methods to achieve the highest rates of local manufacturing, transfer and localization of technology in cooperation with international expertise, praising the efforts of President Abdel Fattah El-Sisi to build bridges of communication and cooperation with African brothers, enhance trade exchange and restore relations. Egyptian African for its golden era.