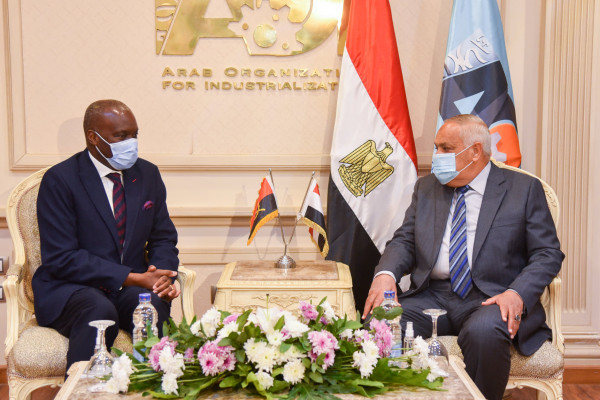 Lieutenant General Abdel Moneim El-Terras, head of the Arab Organization for Industrialization, stressed the importance of strengthening cooperation with the countries of the African continent, in light of the country's strategy to open up to Africa and the directives of President Abdel-Fattah El-Sisi to open new horizons of cooperation and integration to achieve the hopes and aspirations of our African peoples.

This came during the visit of Mr. Nelson Cosme, Ambassador of the Republic of Angola in Cairo, within the framework of strengthening Egyptian-African cooperation.

In this regard, the "Terrace" affirmed that the Arab Organization for Industrialization puts all its capabilities and technical and technological expertise to serve our African continent, referring to discussing participation in development projects and meeting the needs of our brothers in Angola.

He added that we have agreed to exchange visits and participate in infrastructure projects, renewable energy, digitization, electronic archiving and other areas of development, stressing the importance of training in various fields and qualifying Angolan technical cadres in the factories of the Arab Organization for Industrialization.

On the importance of the entry into force of the African Continental Free Trade Area for the continent's economy, the President of Arab Industrialization considered that this agreement and its entry into force is an important opportunity to enhance joint cooperation, achieve comprehensive development for all African countries, enhance intra-trade and open new areas for export.

During his inspection of the exhibition of the products of the Arab Organization for Industrialization, Mr. Nelson Cosme affirmed his country's keenness to strengthen partnership and cooperation relations with Egypt as a leading country in the African continent, praising the development boom taking place in Egypt and its unprecedented steps for digital transformation.

Cosmi praised the positive role of the Arab Organization for Industrialization and its bright fingerprints in many important development and strategic projects on the African continent, pointing to his country's aspiration for the Arab Industrialization’s participation in development projects in Angola and various industry fields, including defense industries, health, medical industries, preventive sterilization cabins, communications, electronics, digital transformation and renewable energy. Converting cars to work with natural gas, drinking water purification stations, sewage drainage, LED bulbs, water and energy rationalization, and other areas of development, in addition to training human cadres in the training units and centers of the Arab Organization for Industrialization.

The Angolan ambassador also went for a field visit to inspect a number of Arab Industrialization units, including the Qadir factory and the Authority’s Academy for Training according to the mechanisms of digital transformation and artificial intelligence. The state plan for digitization and modernization of production lines in accordance with the standards of the Fourth Industrial Revolution.

In a related context, Nelson Cosme praised the role played by Egypt and the success it achieved during the presidency of the African Union last year, adding that Egypt enjoys respect on the continent and the world level.