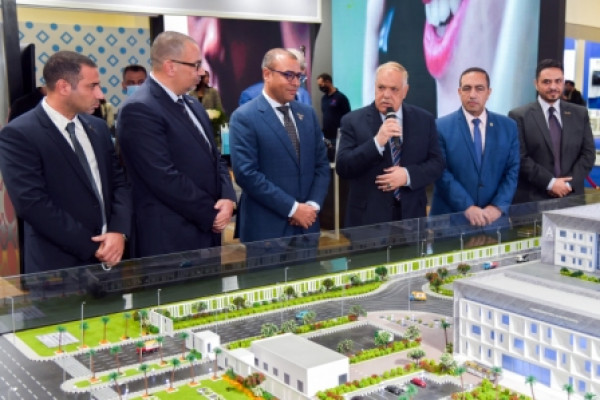 Today, Lt. Gen. Abdel Moneim El-Terras, Chairman of the Arab Organization for Industrialization, and Eng. Ahmed Mekki, Chairman and CEO of Bena Corporation, witnessed the signing of an agreement between “Bunia Cables” and the Consulting Engineers Group, for cooperation in designing and supervising the construction of the new headquarters of the company. Structure Cabling and Structure Manufacturer for Optical Fiber Cables.

This agreement comes within the framework of the final executive steps to establish the largest factory for manufacturing optical fiber cables in Egypt, Africa and the Middle East, with investments exceeding one billion pounds, in the Suez Canal Economic Zone.

The cooperation agreement was signed at the pavilion of "Bunia" company at Cairo ICT Exhibition as part of its participation in this exhibition.

In this regard, the "Terrace" stressed the implementation of President Abdel Fattah El-Sisi's directives to deepen local industrialization, transfer and indigenize modern technology, and work to reduce imports, in a way that contributes to increasing the added value of Egyptian products and achieving smart digitalization of all mega development projects.

Al-Terras explained that the cable factory is an industrial edifice that provides many job opportunities for young engineers and technicians and training on the latest fiber-optic cable technology according to the standards of the Fourth Industrial Revolution, pointing out that Arab Industrialization aims with this partnership to establish a national industry that meets the needs of the local market in terms of advanced technology infrastructure. For networks and communications to serve development projects and smart cities inside Egypt, in addition to opening export outlets for the Arab region and Africa.

For his part, Eng. Ahmed Makki explained the importance of this agreement, which comes within the framework of the company's direction to support the achievement of the goals of digital transformation plans in Egypt and Africa, indicating that the launch of a "cable structure" in partnership with the Arab Organization for Industrialization and "Corning Incorporated", the world leader in fiber Photovoltaic, is one of our most important achievements during the year 2020.

Makki stated that the establishment of the factory in the Suez Canal Economic Zone contributes to opening export outlets for the Arab region and Africa, due to its distinguished location, which contributes to the ease and speed of these countries' access to cables.

In this context, Mr. Essam Khafaji, CEO of Bunia Cables, expressed his pleasure in cooperating with the Engineering Consultants Group (ECG) to design and supervise the construction of the company's new headquarters and optical fiber factory.

Khafaji also mentioned that the optical fiber industry is the cornerstone for the economic launch of digital transformation projects, especially in light of the major national projects undertaken by the state in the field of new cities, technological infrastructure and smart applications.

In his turn, Eng. Omar El-Sayed, Executive Director of the Consulting Engineers Group, indicated that the signing of this agreement comes to confirm the main and pivotal role that the Arab Organization for Industrialization plays in introducing the latest production technologies and the highest quality standards for the Egyptian industry, praising the "Bania" company, a pioneer in the field of communications. And information technology and technological infrastructure in Egypt and the region.

He added that the Consulting Engineers Group puts all its scientific expertise into designing the cable factory and supervising construction works according to international quality standards and the Fourth Industrial Revolution, to be an integrated factory with smart digital production lines to meet the needs of the local market of optical fiber cables and export to the African and Arab region.