protocol of cooperation with the Industry Modernization Center

Home - news - protocol of cooperation with the Industry Modernization Center

protocol of cooperation with the Industry Modernization Center 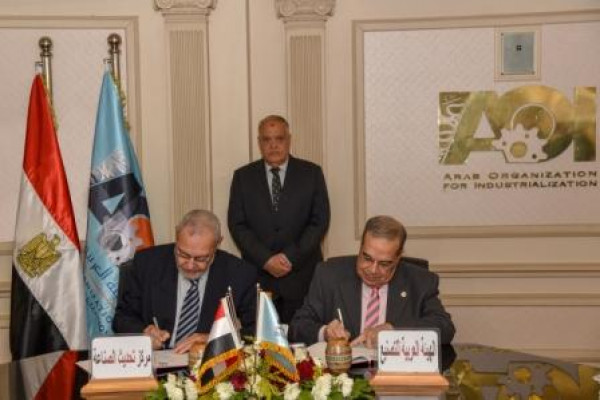 " lieutenant  Abdel Moneim El-Terras," Chairman of the Arab Organization for Industrialization, stressed the importance of implementing the assignments of President "Abdel-Fattah El-Sisi" to deepen local industrialization and localize technology and contribute to achieving the strategic plan for industrial development and export.

This came during the signing of a protocol of cooperation and partnership between the Arab Organization for Industrialization and the Industrial Modernization Center, in the context of supporting the country's efforts to deepen local industrialization.

In this regard, the "Terrace" stressed the importance of achieving partnership and integration with the Center for Industrial Modernization to support the state's efforts to increase the proportions of the local component and the added value of Egyptian products and increase competitiveness, stressing that opportunities for the Egyptian industry to return to its leadership are now available in light of the availability of serious political will and continued follow-up to the President "Abdel Fattah El-Sisi" programs to deepen local industrialization, technology transfer and localization.

During the discussions with the Industrial Modernization Center, he reviewed all the manufacturing capabilities available at the Arab Organization for Industrialization, foremost of which is the renewable energy sector, infrastructure, wastewater and industrial wastewater treatment and purification, pumps and electronics, railway equipment and medical equipment manufacturing, as well as environmentally friendly transportation, especially vehicle manufacturing Electrical in Egypt.

And the "terrace" indicated that it was agreed to support and develop the Egyptian industry through a joint executive action plan and start restricting production inputs to study their manufacture locally and forming working teams to study the needs and set implementation mechanisms at specific times by taking advantage of the production capacities of the units of the Arab Organization for Industrialization, stressing that our economic progress Subject to an increase in the proportions of the local component.

He pointed out, "The Terrace" to close cooperation with all research centers and universities to increase the proportions of the local component and the authority's interest in expanding the horizons of partnerships and cooperation with major international companies, including contributing to the transfer of technical expertise and the localization of modern technology and training human cadres.

For his part, Dr. Amr Taha, Executive Director of the Center for Industrial Modernization, stated that the joint cooperation plan depends on achieving integration and partnership between the Industrial Modernization Center and the Arab Industrialization Authority, which has a huge industrial and technological base that enables it to play a vital and influential role in the design and manufacture of products and components that are imported from Abroad, which reflects positively on reforming the deficit in the trade balance of Egypt and also in supporting the various industrial sectors in the country and supporting the private sector.

He added that coordination was agreed upon to organize forums aimed at achieving integration between the authority and the center to meet the needs of industrial companies, in addition to coordination for the development of Arab manufacturing units in accordance with the latest modern scientific systems