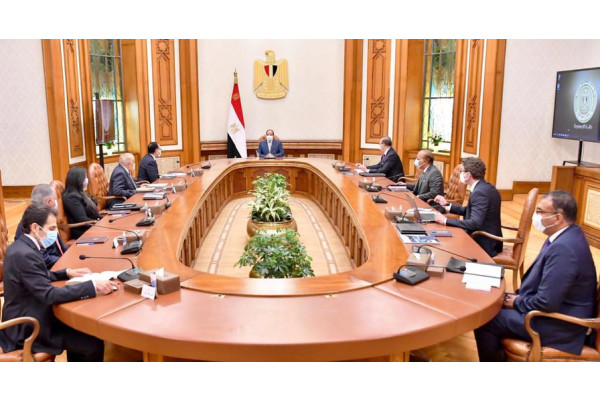 The Spokesman for the Presidency of the Republic stated that the meeting dealt with the follow-up of cooperation between the Arab Organization for Industrialization and. DMG. MORI to establish a digital plant for the production of high-precision turning machines, which are used in the basic industries of the business sector in all its various fields.

The executive and contractual position between the Authority and .DGM Company was reviewed. MORI to establish the factory, which is the first of its kind in Egypt and the African continent, and aims to produce ultra-advanced CNC lathe machines that work with laser and ultrasound technology.

The chairman of the German company confirmed that it seeks cooperation with the Egyptian government in this field due to the great potential that the Egyptian market currently boasts, the economic growth that Egypt currently enjoys, and the comprehensive development process that includes mega national projects at the republic level, especially the Life initiative. The dignity and development of the Egyptian countryside, which are factors that enable Egypt to possess many preferential advantages within the framework of an attractive investment climate and a promising economy, which enhances the success of the company's activity, not only inside Egypt, but also by penetrating the African continent, indicating that the company considers Egypt the face of the continent The headquarters, with its strategic position and position, reinforced by factors of stability and an attractive investment climate, under strong and wise political leadership.

from his side; The President pointed out the state's openness to support the activity of. DMG. MORI in Egypt and confidence in its ancient German experience, stressing the importance of the process of localizing industry and transferring technology to Egypt within the framework of the partnership between the two sides, and expressing the prestige and appreciation of the German experience and personality in Egypt with its diligent and accurate work culture and high-quality production, as Egypt is looking forward to localizing these principles locally, as well as crystallizing training and qualification programs for cadres to refine the skilled labor in order to provide the best industrial services in the basic business sector, in a manner that meets the Egyptian state's unlimited ambition in industrial development, progress and development, as well as providing new job opportunities now. And for the future.