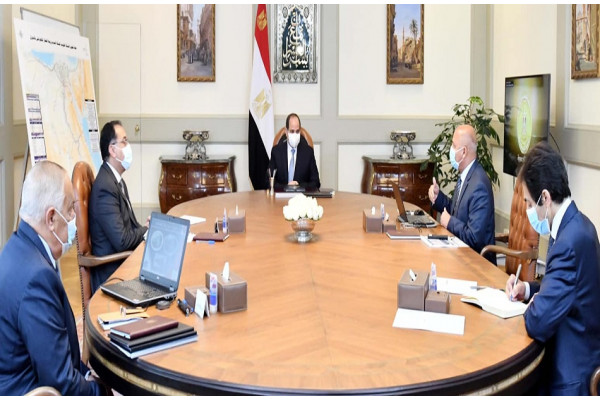 Ambassador Bassam Radi, spokesperson for the Presidency of the Republic, stated that the meeting dealt with reviewing "the railway network development plan and linking the new electric train tracks with the existing railways."

The President directed the immediate implementation of the plan to develop the national railway network, by adding new tracks of the high-speed electric train lines, while linking them to the existing train network, stressing the importance of this system as a key factor in the implementation of the state's strategy to achieve integration between development elements in all areas at the level of The republic consists of industrial and agricultural areas, cities and urban communities, and linking them to new ports and logistical centers, taking into account the expected increase in the demand for the use of transportation, given the huge current and future development efforts in the country.

The Spokesman stated that the meeting witnessed the presentation of the plan for the construction of the new express electric train network and the system of interchange stations to connect with the existing network, as well as the main and regional stations distributed on the group of electric train lines to connect the main geographical regions and directions of countries with new paths extending from Ain Sokhna to New Alamein and from there to Matrouh, as well as from 6th of October City to Aswan, and from Hurghada to Luxor, with a total length of about 1795 km

Efforts to develop the national railway network with all its components were presented, including the development of the fleet of mobile units on the railways, including new vehicles for transporting passengers and goods, in cooperation between the Ministry of Transport and the Arab Organization for Industrialization, as well as the current measures taken and future plans to modernize the administrative systems. And the operating systems of the railway network, which include infrastructure projects such as developing signals and crossings to ensure the enhancement of safety and safety standards, as well as reviewing efforts to renew and maintain the railway network, raise the efficiency of workshops and develop stations across the country.