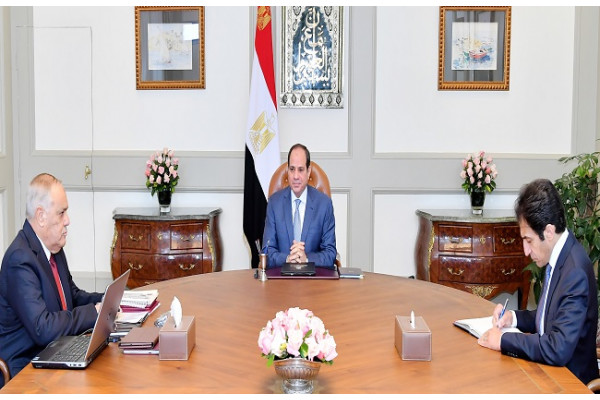 According to an official statement by the Presidential spokesman; Ambassador Bassam Radi, during the meeting President El-Sisi and El-Terras discussed all developments related to the activities, plans and projects of the Arab Organization for Industrialization in various fields, as well as existing cooperation frameworks in this regard with a number of Arab and foreign countries.

The Presidential Spokesman also stated that President El-Sisi called for continuity of all efforts of developing and modernizing the AOI in order to meet the requirements of the sustainable development plans in Egypt, and in line with the policy of achieving optimal utilization of resources and developing local industrialization.

President El-Sisi also discussed with El-Terras recent AOI’s efforts to cooperate with various international companies and strengthening the industrial partnership with them as well as exchanging relevant experiences, including what contributes to the transfer and localization of technology in Egypt, in the context of the importance of the role played by the AOI in the field of industry and participation in the implementation of national and development projects in the country, as a national industrial institution qualified with Human potential and manufacturing base.

On the other hand, Ambassador Bassam Radi said that the Chairman of the Arab Organization for Industrialization presented during the meeting the latest researches and industrial projects in the civil and military fields, indicating that the organization is keen to apply the highest international quality standards and specifications in its production lines, so that its activity in civil manufacturing extends to the infrastructure sectors, especially in fields of transportation, cars, electric trains, electronics, information technology, smart systems, and renewable energy.

General Abdel Moneim El-Terras also reviewed the existing partnership of the AOI with authorities in a number of Arab and foreign countries, besides opening of new frameworks for joint cooperation and exchange of experiences with it, in light of the capabilities of the AOI and the production of its factories of high-quality products.