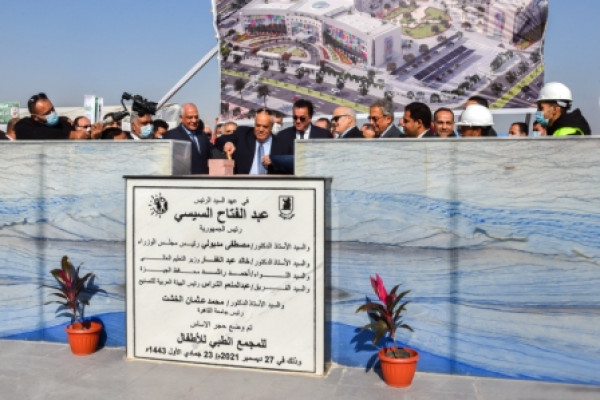 It was Monday ,Laying the foundation stone for the largest pediatric medical complex in the Middle East at Cairo International University, at the Cairo International University headquarters in the Sixth of October City, in the presence of Dr. Khaled Abdel Ghaffar, Minister of Higher Education and Scientific Research, Lieutenant-General Abdel Moneim Al Terras, Chairman  of the Arab Organization for Industrialization, and Major General Ahmed Rashid, Governor of Giza..

Where the Arab Industrialization was entrusted with the implementation of this huge project to establish a medical complex for the treatment of children, which comes as a continuation and extension of the pediatric hospitals in Qasr Al-Ainy, and an affirmation of the political leadership’s interest in developing the health care system for the Egyptian citizen and providing treatment services to all segments of society, and work began more than a year ago in the establishment of The complex is after the University Council approved Dr. Elkhosht’s proposal, and the Giza Governor welcomed the idea, given the Giza Governorate’s need to increase medical facilities to meet the needs of the governorate’s residents.

The project to establish a medical complex for children is the largest project that provides health care to children in the Middle East, as it aims to treat children and improve their health conditions by providing the best health care facility with the best cadres of medical staff, surgeons and nursing.

The Children’s Medical Complex project is being built on an area of ​​70,000 square meters, with a bed capacity of more than 300 beds, between nursing beds, intensive care beds, and nurseries. Medicine in the Middle East includes 14 groups of outpatient specialties, with 44 clinics with their attachments, including outpatient clinics for all pediatric specialties such as strabismus, genetics, collagen, catheterization, heart, chest, brain, neurology, liver, general surgery, plastic surgery, urology, ophthalmology and ultrasound.

As part of the celebration of laying the foundation stone for the largest pediatric medical complex in the Middle East at Cairo International University, Lieutenant-General Abdel Moneim Al-Terras, Chairman  of the Arab Organization for Industrialization, said that the authority considers itself the industrial back-up of the Egyptian state and a major supporter of all state projects, and it is important for us to be a partner of Cairo University in this project. the giant .

Al-Terras added, during his speech at the press conference held now on the sidelines of the foundation stone laying ceremony for the Children’s Medical Complex at the International Branch of Cairo University, that we are proud in the Arab Organization for Industrialization that we are a partner with Cairo University in this giant project, the largest medical complex for children in the Middle East, noting that the authority is in Continuous cooperation with Cairo University and many universities, and we always strive to link scientific research with industry.

The Chairman of the Arab Organization for Industrialization added that the authority, within the framework of the establishment of the Medical Complex for Medical Industries, production begins at the end of 2022 and includes the production of hospital supplies, surgical sutures and many medical industries in cooperation with foreign companies in this field.