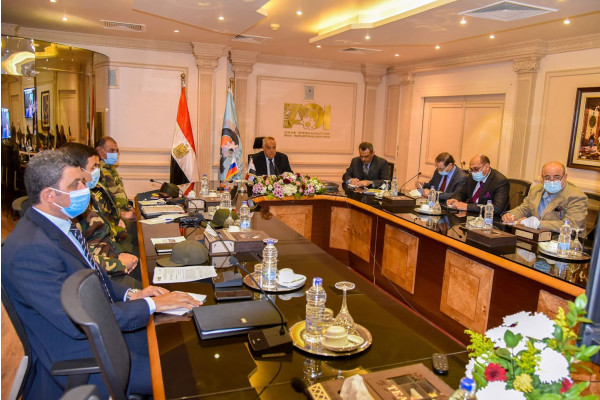 Lt. Gen. Abdel Moneim El-Terras, Chairman of the Arab Organization for Industrialization, emphasized the importance of implementing President Abdel Fattah El-Sisi's directives to strengthen constructive cooperation between the country's industrial and research institutions and to exploit national manufacturing capabilities to deepen local manufacturing and localize the technology for manufacturing equipment for desalination plants.

This came during the cooperation talks that took place through video conference technology between Arab Industrialization, the Engineering Authority for the Armed Forces, Alexandria University, and the Russian "Rosnano" Foundation, which is specialized in this field.

In this regard, "Al-Terras" stated that with this cooperation we aim to deepen the manufacture of equipment and components of seawater desalination plants with the Egyptian national expertise, pointing to the agreement to discuss establishing a specialized factory for the manufacture of seawater desalination membranes, in partnership with the Russian side, with the technological capabilities of the Arab Organization for Industrialization according to standards International quality at competitive market prices.

The "Terrace" praised the experiences of the Russian "Rosnano" Corporation as one of the important entities specialized in the field of seawater desalination, explaining the agreement to increase the proportions of the local component for the production and manufacture of technologies to save the costs of importing the components used in the manufacture of desalination plants, and to reduce imports to save huge sums of hard currency. On the other hand, localizing this industry in a way that contributes to reducing the price per cubic meter of water and achieving a high added value for the national industry.

The "Terrace" mentioned that the areas of cooperation aim to meet the needs of the local market and national projects, and expand in the future to the African and Arab markets, referring to the preparation and implementation of training programs for technology transfer in cooperation with the University of Alexandria and to provide the necessary support for research and development work and to benefit from research and applied studies at the university, as well as conducting Market studies for the targeted product locally and abroad.

In a related context, the "Terrace" discussed with the Russian "Rosnano" Corporation, the possibility of signing a cooperation protocol in a number of industry areas with the aim of transferring and settling technology, including converting cars to run with natural gas.

For his part, Dr. Abdel Aziz Kansoua, President of Alexandria University praised the pivotal role that the Arab Organization for Industrialization plays in introducing the latest production technologies and deepening local manufacturing in accordance with international quality standards, pointing to the importance of strengthening cooperation with Arab Industrialization to reduce the economics of establishing seawater desalination plants within the framework of The government’s approach to finding non-traditional alternatives to water resources, expanding the establishment of seawater desalination plants, especially in coastal cities, in addition to increasing the production and capacity of some existing stations.

For his part, President of "Rosnano" Corporation praised the cooperation with the Arab Organization for Industrialization and its pioneering role in deepening local industrialization, pointing to the Russian Foundation's aspiration to establish partnerships with Arab Industrial for the transfer and localization of modern technology in various fields of industry, in accordance with international quality standards.