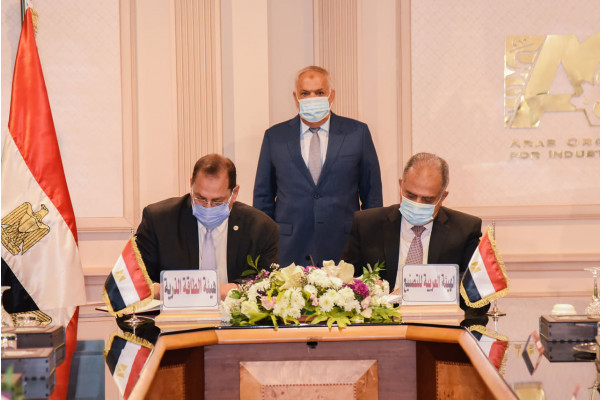 Lieutenant General "Abdel Moneim El-Terras", head of the Arab Organization for Industrialization, emphasized the importance of the partnership with the Atomic Energy Authority to exchange experiences and support the state's efforts to increase the ratios of the local component and the added value of Egyptian products, reduce imports and create export opportunities, stressing that the opportunities for the Egyptian industry to return to leadership are now available in light of the availability of The national will and the continuous follow-up of President "Abdel-Fattah El-Sisi" to programs to deepen local industrialization, transfer and localize technology.

In this regard, "Al-Terras" explained that the Arab Organization for Industrialization has a clear vision to deepen local manufacturing, transfer and localize technology in many different fields of industry, including, for example, medical industries, cars, spare parts, desalination and purification plants, sewage, pumps, smart meters, electronics, railways, and means Environmentally friendly transportation, digital transformation, renewable energy, and the conversion of obsolete cars into environmentally friendly cars using natural gas.

He added that an agreement has been reached on the partnership and alliance between the Arab Organization for Industrialization and the Atomic Energy Authority and to start counting production inputs to study their manufacture locally, and to form joint work teams to study the needs and set up implementation mechanisms at specific times, both with regard to the manufacture of investment goods and components that are imported from abroad.

The "Terrace" referred to the joint cooperation to discuss successful models with technical and economic feasibility in all universities, research centers and bodies and the Atomic Energy Commission, which can be applied at the industrial level by transferring research outputs to the scope of quantitative production, by taking advantage of the manufacturing and human capabilities distinguished in the Arabic industrialization.

For his part, Dr. Khaled Hamed Saqr explained that the joint cooperation plan depends on achieving integration and partnership between the Atomic Energy Authority and the Arab Organization for Industrialization, which has a huge industrial and technological base that enables it to play a vital and influential role in designing and manufacturing products and components that are imported from abroad, which is the matter. Which is reflected positively on the trade balance of Egypt and also in supporting the various industrial sectors in the country and the private sector.

He added that the institute, in cooperation with Arabia for Industrialization, aims to build a national scientific and technological base, stressing the importance of strengthening cooperation in industrial technologies through technological development and innovation.

Saqr stressed the importance of reaching the minimum percentage of the local component in the various industrial sectors for a ratio of more than 40%, in a way that contributes to achieving the main goals of sustainable development.