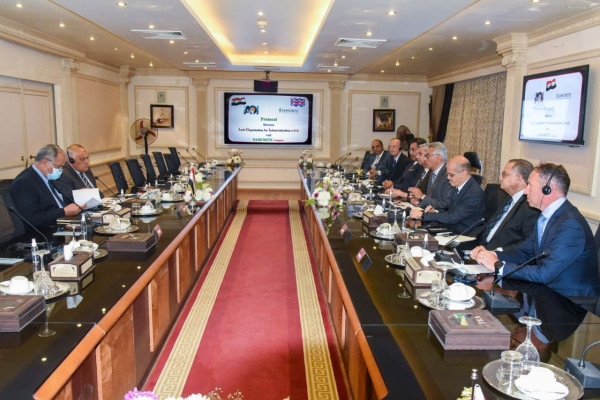 This came during the signing of two (2) cooperation protocols

The first with the Samcrete group of companies

In this regard, "The Terrace" praised the experiences of Samcrete Group of companies in the field of implementing national projects in Egypt, Africa and the Middle East, explaining that it was agreed on cooperation and integration to implement national projects in accordance with Egypt's Vision 2030.

He added that it was agreed to coordinate efforts and exchange experiences regarding the file of deepening the auto industry in Egypt in cooperation with the Federation of Industries and the Ministry of Industry, pointing to the joint cooperation by utilizing the training capabilities available at the Arab Organization for Industrialization and the Samcrete group of companies to create qualified cadres in the field of various industries.

The "Terrace" also explained the importance of cooperation with the Egyptian National Company for Railroad Industries, " Neric ", to achieve integration in the railway industry and mobile units between the SEMAF plant of Arabia for Manufacturing and the " Neric " factory, in order to prevent interference between the activities of the manufacturers, pointing out that the SIMAF factory is specialized in manufacturing units. Moving diesel vehicles, such as cargo wagons, passengers, and sleeping cars, and raising the efficiency of metro cars. As for the Nerek factory, it is planned to work in manufacturing mobile electric units such as monorail, express train and electric train.

In a related context, the "Terrace" stated that it had agreed to form a joint committee with the "Samcrete" group of companies and the Egyptian National Company for Railroad Industries " Neric " to study the implementation of future projects in Egypt and African and Arab countries, stressing that this cooperation will provide many job opportunities for young people from Engineers and technicians, training and acquiring modern skills and experiences in accordance with the standards of the Fourth Industrial Revolution.

The "Terrace" pointed to the importance of achieving integration between Arab Industrialization, with its expertise and the group of Samcrete companies, as well as the Egyptian National Company for Railroad Industries, " Neric ", as they are partners in the industrial zone in East Port Said, and to coordinate joint cooperation in many industries, including railways, electronics, castings, fiber, stainless steel and others. Various areas of development.

For his part, Eng. Karim Sami Saad, Chairman and CEO of Samcrete Group, stressed the importance of the pivotal role played by the Arab Organization for Industrialization in introducing the latest production technologies and deepening local manufacturing in accordance with international quality standards.

In his turn, Eng. Ahmed Fikry Abdel Wahab, Managing Director of the Egyptian National Company for Railroad Industries Neric, , referred to the importance of strengthening cooperation with the Arab Company for Industrialization as the country's industrial backer, and making use of its technological expertise, to increase the rates of local manufacturing and localize modern technology in the field of railways, monorail and train Express and electric train.