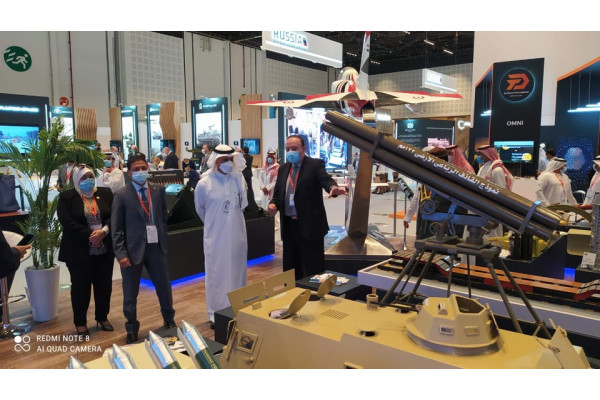 Lt. Gen. Abdel Moneim El-Terras, head of the Arab Organization for Industrialization, confirmed that Egypt's stature and pioneering role were a strong incentive for many major international companies to hold joint meetings with the Arab Industrialization delegation.

The "Terrace" expressed its aspiration to establish partnerships with major international companies with international weight in the field of advanced defense systems, inviting exchanges of visits and experiences with the factories and companies of the Arab Organization for Industrialization, identifying areas of cooperation of common interest and coordination to find scientific and technological solutions for defense equipment and systems.

This came within the framework of Arab Industrialization’s participation in the "IDEX 2021" exhibition, which was launched in the UAE capital Abu Dhabi and will continue during the period from February 21 to February 25.

The activities of the exhibition witnessed intense activity by the Arab Organization for Industrialization, as the Authority’s pavilion, which is the largest within the exhibition pavilions, witnessed a great presence and momentum for a number of major international companies in the military and defense industries and great interest from major armament companies and international officials, as the engineer, “Ahmed bin Abdulaziz Al-Ohali” “The Governor of the Saudi General Authority for Military Industries inspected the Arab Industrialization Pavilion, and briefed those in charge of it on the latest smart systems that the authority employs in its defense industries according to the latest international methods and technologies in force in this industry.

Al-Ohali expressed his pride in the participation of the Arab Organization for Industrialization in such a global event to present its latest innovations in the field of defense industries of all kinds, expressing his admiration for the quality and distinction of products and the distinguished role of the authority in meeting the needs of Arab countries of advanced defense industries.

The activities of the first day witnessed a number of senior ministers and officials inspecting the Arab Industrialization Pavilion, as they praised the advanced technological and technical capabilities they saw in the Authority’s pavilion at the exhibition, which reflects Egypt's strength and progress in the field of defense industries.

In the context of enhancing cooperation with the African continent, cooperation was discussed with Dr. Amani Asfour, head of the African Alliance for the Empowerment of Women, with Dr. Khaled Daabs, Chairman of the Board of Directors of Africa Vision, and an examination of what could be submitted to enter the African market.

Cooperation was also discussed with a number of 8 major international companies and officials of the military and defense industries in a number of countries, with the aim of exchanging experiences and coordination to open areas for cooperation in areas of common interest.

Within the framework of the activities of the second day, many interviews were conducted, including the Jordan Group for Investment and the Jordan Center for Design and Development, cooperation in the field of defense systems, overhauls, research and training with 7 international companies, as well as the possibility of marketing Arab products for industrialization in a number of countries in the Arab and African region were discussed. .