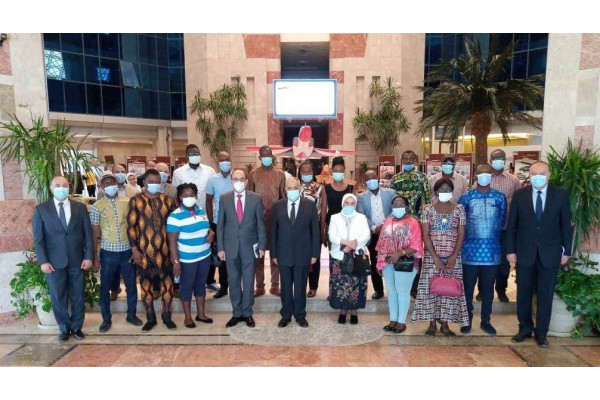 Lieutenant-General Abdel Moneim Al-Terras, head of the Arab Organization for Industrialization, stressed the importance of implementing the directives of President Abdel-Fattah El-Sisi to enhance cooperation and integration with the African brothers, noting that the Arab Organization for Industrialization puts all its expertise and human and technological capabilities into cooperation and partnership with our brothers in the African continent in all development projects and the exchange of experiences. And training human cadres in accordance with the standards of the Fourth Industrial Revolution in many different fields of industry.

This came within the framework of the visit of the delegation of French-speaking African broadcasters (Advanced Training Course No. 10), which is organized by the Ministry of State for Information in cooperation with the Ministry of Foreign Affairs.

This visit is a confirmation of the continuous communication between the Arab Organization for Industrialization and the Ministry of State for Information, where such visits take place annually, with the aim of informing students and trainees from all sister African countries about the activity of the Authority and its efforts to deepen local industrialization and the settlement of modern technology, as well as Supporting and adopting the implementation of industrially applicable innovations.

In this regard, the "Terrace" expressed its pride in the African delegation's visit as an opportunity to enhance the true image of the capabilities of the Egyptian industry, as well as to open new channels of communication and enhance areas of cooperation and exchange of experiences, within the framework of supporting the relations of integration and partnership between Egypt and its African brothers.

During his meeting with the delegation of trainees, which included many different brotherly African countries, Lieutenant-General Abdel Moneim Al-Terras indicated that the Arab Industrialization represents the industrial back-up of the Egyptian state for the settlement of technology, manufacturing and development in accordance with the standards of the Fourth Industrial Revolution, referring to the date of the establishment of the authority and its national role as one of the results of victories The October War, and its role in meeting the needs of the Arab and African brothers in the defense and civil industries.

Al-Terras pointed to the authority's interest in training human cadres according to the mechanisms of digital transformation, deepening local manufacturing, transferring and localizing modern technology in partnership with major international companies in many fields of industry, pointing out that the Arab Industrialization Academy for Training welcomes all learners and human cadres through specialized training courses in all fields. The fields of industry, management, information systems and communication technology according to the latest modern digital training systems, the strengthening of smart automated management mechanisms, and training on programmed machines according to the standards of the Fourth Industrial Revolution.

The Chairman  of the Arab Organization for Industrialization also stressed the importance of providing all forms of support, qualification and training for African learners, benefiting from their capabilities and empowering them in leadership positions in their country, pointing to the importance of (Advanced Training Course No. 10), organized by the Ministry of State for Information in cooperation with the Ministry of Foreign Affairs, which aims to prepare a new generation. One of the most influential African leaders on the continent, with the necessary training and skills, with a vision consistent with Egypt's vision and direction to achieve African integration and unity.

During the inspection of the Arab Products Exhibition for Industrialization, the delegation of African broadcasters expressed their admiration for the authority’s various products and manufacturing capabilities to develop technology in scientific methods to achieve the highest rates of local manufacturing, transfer and localization of technology in cooperation with international expertise, praising the efforts of President Abdel Fattah El-Sisi to build bridges of communication and cooperation with African brothers and strengthen Trade exchange and the return of Egyptian-African relations to their golden era.

The visit also included a visit to the Training Academy at the Arab Organization for Industrialization, which was officially inaugurated a few days ago in partnership with the international German "DMG" company, through which the human cadres are trained and qualified through specialized training courses in all fields of industry, management, information systems and communication technology according to For the latest modern digital training systems, strengthening the mechanisms of intelligent automated management, and training on programmed machines according to the standards of the Fourth Industrial Revolution.

Then the African delegation went for a field visit to inspect the electronics factory, where they inspected the production lines of tablets, computers, interactive screens, electronic devices, surveillance cameras and other requirements of advanced smart electronic devices. They were also briefed on the future plans carried out by Arab Industrialization to support the state’s plan for digitization and modernization of production lines according to the standards of the industrial revolution. Fourth.