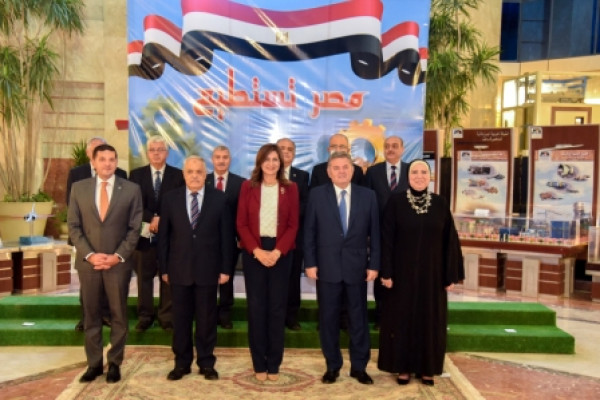 During the talks, Ambassador Nabila Makram, Minister of Immigration and Egyptians Affairs Abroad, indicated the importance of forming an executive committee for the Egypt Conference that can make industry with the participation of the ministries of industry, business and military production, Arab industrialization and the Federation of Egyptian Industries to listen to their technical vision in the conference axes and identify the specializations that are addressed by experts abroad, stressing the importance of attracting Egyptian immigrant minds in order to contribute to the production and design of alternative products to imports that we import from abroad, in addition to starting to inventory production inputs to study their manufacture locally, and to form joint work teams to study needs and set implementation mechanisms at specific times, both with regard to the manufacture of investment goods and components that are imported From outside.

She indicated that cooperation will be made with all relevant ministries, especially trade and industry, as well as the business sector, military production, Arab industrialization and the Federation of Industries to reach a comprehensive action plan for the success of this important event.

Makram stressed that the success of the previous sessions of the conference, and the competing of the people of Egypt abroad to share their concerns and issues, and their readiness all to present their expertise and experiences to Egypt, is what calls for the Ministry to continue organizing this conference and allocating its sessions to serve development and investment issues and efforts in the Egyptian state, in a way that serves The end: The goals and priorities of the sustainable development strategy and the "Egypt 2030" vision.

The Minister of Immigration and Egyptians Affairs Abroad added that Egypt is rich in human treasures around the world, praising the efforts of Egyptians abroad and their keenness to raise the name of their country high in any field they attend.

For her part, Mrs. Nevin Jameh, Minister of Trade and Industry, affirmed that holding the "Egypt Can" conference in its new session on Egyptian industry comes in line with the great interest that the state attaches, headed by His Excellency President Abdel Fattah El-Sisi, to the development and development of Egyptian industry, in particular, as it represents the locomotive of development for the national economy. The Ministry is keen to provide all its capabilities for the success of this important event, which is a great opportunity to review all the ingredients and capabilities that the Egyptian industry possesses in all its sectors, as well as attracting Egyptian investments abroad to invest in the Egyptian market.

Hisham Tawfiq, Minister of the Business Sector confirmed that the formation of a joint committee for the Egypt Conference that can industry comes in light of a joint vision between the Ministry of Business Sector, the Ministry of Industry and Trade, the Ministry of Military Production and the Arab Organization for Industrialization to unify efforts and achieve integration to deepen local manufacturing in accordance with international quality standards. The best path to development must be through concerted efforts and investment of all capabilities of our national institutions.

For his part, Lieutenant General "The Terrace" affirmed the implementation of President Abdel Fattah El-Sisi's directives to strengthen constructive cooperation between state institutions and exploit national manufacturing capabilities, noting the importance of strengthening efforts to deepen local industrialization, transfer and localize modern technology and work to reduce imports, in a way that contributes to increasing added value. For Egyptian products.

The "Terrace" also expressed its appreciation for the efforts of the Ministry of Immigration and its support to increase the role of Egyptian experts abroad in all national projects and linking Egyptian investors and Arab brothers to their greater homeland, referring to the strategy of the Arab Organization for Industrialization to open communication channels with scholars and experts to benefit from Egypt's intellectual wealth in the Authority’s development projects.

The head of the Arab Industrialization Company stressed the importance of enhancing the fields of creativity and launching into the future horizons, by making use of the national human energies and communicating with the elite sons of Egypt locally and internationally.

He added that the authority has set a strategy represented in adopting new ideas and developing our products, developing human competencies, manufacturing everything that the Egyptian, Arab and African market needs, and exporting Egyptian products that are able to compete globally,

The "Terrace" pointed out that the "Egypt Can" initiative is a vivid example of the Ministry of Immigration's cooperation with other ministries and is in line with the state's trends.