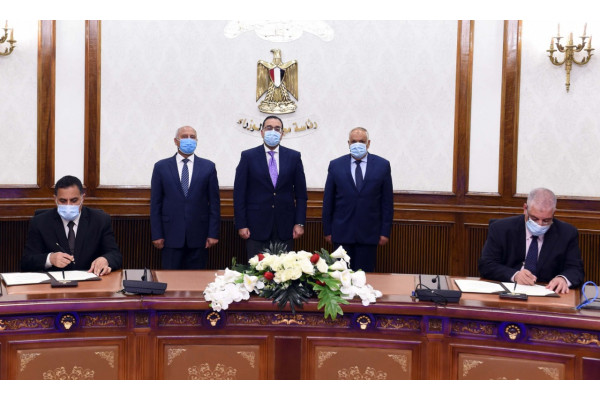 Dr. Mustafa Madbouly, Prime Minister, today, in the presence of Eng. Kamel Al-Wazir, Minister of Transport, and Lieutenant General Abdel Moneim El-Terras, Chairman of the Arab Organization for Industrialization, witnessed the signing ceremony of a contract agreement between the Ministry of Transport, represented by the National Authority for Egyptian Railways, and the Arab Organization for Industrialization, represented by Semaph plant; With the aim of strengthening cooperation between the railway and the SIMAF plant, and maximizing the local product in the field of railway carriage industry.

Following the signature, the Minister of Transport indicated that this agreement includes the SEMAF factory, affiliated to the Arab Organization for Industrialization, to manufacture and supply 1000 cargo vehicles of various types, including 300 tipper trucks, 375 container deck cars, 150 tanker vehicles, 125 box wagons, and 50 Spenca vehicles.

Eng. Kamel al-Wazir also indicated that this comes within the framework of the political leadership's directives to localize the transportation industry in Egypt, and to develop the goods transport sector on the railway by increasing the transport of goods via railways. To maintain the road network and increase the railway's financial resources, pointing out that this deal will constitute a major quantum leap in this field, especially with the huge contracts concluded by the Ministry of Transport to manufacture and supply new tractors, from which 110 new tractors and 301 passenger wagons have arrived so far, concurrently. With the development and modernization of signaling systems on railroads, and the renewal of rails and railway infrastructure.

Lieutenant General Abdel Moneim El-Terras explained that this contract is a continuation of the existing partnership between the railway and the CEMAF factory in many large and important projects, on top of which is the project of supplying 140 surface cargo vehicles, which has been completed, as well as the project of developing the internal and external appearance of 200 vehicles. The development of 115 vehicles was completed, in addition to a project to manufacture and supply 100 power generating vehicles, and a project to manufacture and supply 75 grain vehicles.