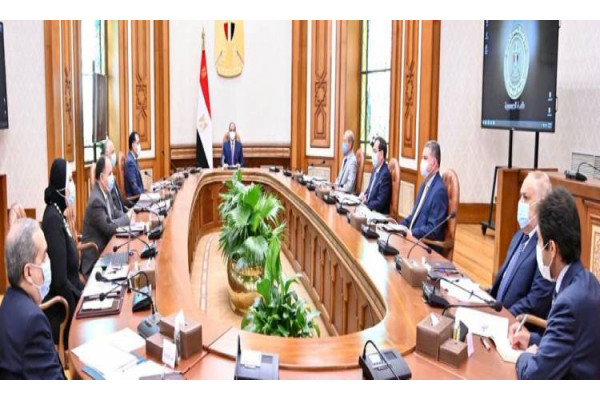 President Abdel Fattah El-Sisi held a meeting today with Prime Minister Dr. Mustafa Madbouly, Assistant to the President of the Republic for National and Strategic Projects, the Governor of the Central Bank, the Ministers of Petroleum and Mineral Resources, Finance, the Public Business Sector, Trade and Industry, Military Production, and the President of the Arab Organization for Industrialization.

Ambassador Bassam Rady, spokesperson for the Presidency of the Republic, stated that the meeting dealt with a review of the axes of the "national strategy for settling vehicles that use clean, unconventional energy sources."

The President directed to accelerate the implementation steps of the state’s plans to localize the new energy-powered car industry in Egypt, to consolidate reliance on energy sources of natural gas and electricity as an alternative to traditional fuels, with the aim of reaching the largest possible percentage of manufacturing and local production of cars and mass transit vehicles, in order to keep pace with future prospects For that industry, and to take advantage of its various social, environmental and economic dimensions.

The meeting dealt with presenting the various axes of the national project to convert vehicles to work with gas, as well as relying on the use of electric cars, in order to keep pace with global progress in the automotive industry and preserving the environment, while presenting the various international experiences in this context to benefit from them, as well as reviewing the axes on which the strategy is based, Especially with regard to establishing the necessary infrastructure, especially stations for new energy supply, providing the legislative environment and relevant investment incentives, as well as adopting mechanisms to stimulate demand for vehicles that run on natural gas.