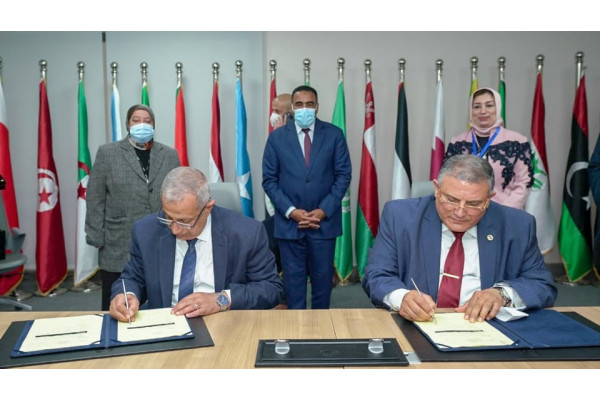 The Arab Academy for Science, Technology and Maritime Transport and the Arab Organization for Industrialization on the one hand, and UCLan University through video conference technology on the other hand, signed a joint cooperation agreement to train engineers and technicians of Arab factories for industrialization and obtain advanced technology courses in the United Kingdom within the European Union programs.

This came during the Industry Consultative Council, which was held at the Arab Academy for Science, Technology and Maritime Transport Branch in the new city of El Alamein, in the presence of Major General "Khaled Shuaib", Governor of Matrouh, and Major General Dr. Mujahid El-Faramawy, Chairman of the Helwan Factory Board of Directors, on behalf of Lieutenant General "Abdel Moneim El-Terras", Chairman Arab Organization for Industrialization.

The agreement was signed by Major General Dr. Mujahid El-Faramawy, Chairman of the Helwan Factory Board of Directors, on behalf of the President of the Arab Organization for Industrialization, on the side of the Academy, Dr. Ismail Abdel Ghaffar Ismail Farag, and on the side of  UCLan University in the United Kingdom, Dr. Ahmed Helmy Onsi, Deputy Dean of the College of Engineering for Development and Projects.

According to the aspects of the agreement, UCLan University bears all costs of training courses, and the European Union bears travel costs, in support of UCLan University in cooperation with the Arab Academy for Science, Technology and Maritime Transport to develop the Egyptian industry and achieve the Egyptian state’s vision for sustainable development 2030 in light of the rapid development of digital transformation.

The council also included the launch of the joint training program between UCLan University, the Arab Academy and the Arab Organization for Industrialization, with the aim of localizing technology and providing young people with labor market skills, as the program aims to train young graduates at the level of the geographical scope of the Arab Republic of Egypt.

The cooperation also includes inviting the factories of the Arab Organization for Industrialization to attend the Industry Council at the Faculty of Engineering of UCLan University in its session held in April 2021, in light of the localization of technology and the creation of an international cooperation environment between Egyptian factories and companies, companies and international entities.

In this context, Lieutenant General Abdel Moneim El-Terras, head of the Arab Organization for Industrialization, stated in his speech delivered on his behalf by Major General Dr. Mujahid Al-Faramawy, that we are launching together towards establishing a new republic in its ideas and vision at all levels, foremost of which is keeping up with technological developments in all aspects. Life.

The "Terrace" stressed the implementation of the directives of President "Abdel Fattah El-Sisi" to achieve integration between state institutions and the optimum utilization of all manufacturing capabilities and national human competencies, in order to achieve deepening local manufacturing for all industries, in accordance with digitization and the standards of the Fourth Industrial Revolution.

The "Terrace" pointed out  that Arab Industrialization, as the industrial backer of the state, has developed an ambitious plan to achieve this goal and transfer and localize modern technology, through cooperation and partnership with major international companies and industrial institutions, pointing out that we aim to achieve Egypt's vision 2030 and meet the needs of the local market and expand to regional African and Arab markets. .

The President of the Arab Organization for Industrialization praised the joint cooperation agreement with the Arab Academy for Science, Technology and Maritime Transport, and the British University of " UCLan ", in the framework of achieving a qualitative leap in the technological development of industry and production in order to achieve the localization of technology with international standards and a competitive capacity for Egyptian exports, pointing to the Arab Industrialization welcoming to arrange visits A field for companies and unions that were present to visit the factories of the Arab Organization for Industrialization to see for themselves the extent of progress and the use of modern technology and the components of the fourth industrial revolution in the production and digitization process that is currently being circulated in all factories.

In a related context, "Al-Terras" explained that the Arab Organization for Industrialization attaches great importance to training and qualifying human cadres in all specialties internally and externally through training in international centers and factories, indicating that the authority owns the largest training centers and academy not only for its employees, but for cooperation with all universities and ministries And Egyptian, African and Arab institutions.

Commenting on the agreement, Prof. Dr. Ismail Abdel Ghaffar Ismail Farag, President of the Arab Academy for Science, Technology and Maritime Transport, expressed his happiness with the agreement, saying: “We are pleased to sign such an agreement with the Arab Organization for Industrialization and UCLan University.

Abdul Ghaffar hopes that this agreement will contribute to achieving benefit for all parties, with regard to training and holding technological courses, within the framework of the academy's tireless efforts to promote the development of partnerships with international institutions, companies and national bodies in order to achieve common goals.

Abdel Ghaffar also emphasized that there is continuous communication and cooperation between the Academy and the various bodies in the headquarters country, the Arab Republic of Egypt, indicating that the Arab Academy for Science, Technology and Maritime Transport has become a strategic partner in various activities and initiatives that support the country's 2030 plan in order to achieve the goals of sustainable development. .

Abdel Ghaffar pointed out that the Academy, as a large Arab experience house, provides all its expertise in the fields of science, consultancy and scientific research to serve the Arab world, stressing that working to produce successful Arab cadres in all scientific, cultural and sports fields comes on top of the Academy’s priorities.

Within the framework of the agreement, it is mentioned that UCLan University is one of the prestigious English universities, as it was established in 1828 and is considered one of the first English universities in the number of students as well as distinguished by its strong relationship with industry and its superiority in the quality of education and practical possibilities, and it is one of the first English universities, which established a branch in the New Administrative Capital It has been working with the Arab Academy since 2015 in support of the development of education, training and industry in the Arab Republic of Egypt.