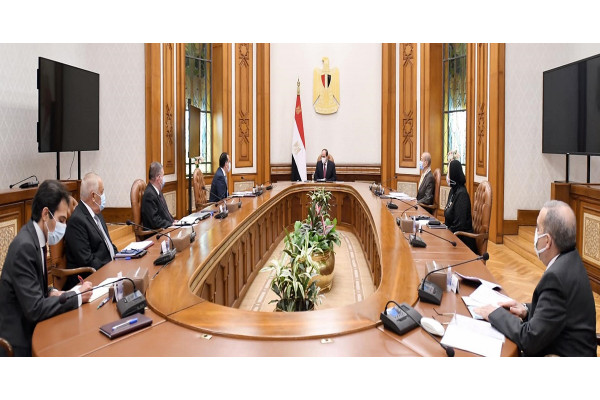 The Spokesman for the Presidency of the Republic stated that the meeting dealt with "reviewing the national strategy for settling the electric vehicle industry and its feeding industries in Egypt."

The President directed the achievement of the main objectives of the strategy, especially the localization of the industry, moving from the assembly stage to a modern stage, comprehensively aspects of car manufacturing and increasing the percentage of the local component, including the industries that feed components, within the framework of relying on clean energy through the production of vehicles Which operates with electricity, natural gas and electricity, to meet the needs of the Egyptian market for vehicles.

The meeting dealt with reviewing efforts to localize the automobile and electric vehicle industry in Egypt, by deepening local manufacturing, and cooperating with international companies specialized in this field to benefit from their expertise and the latest global technology in this regard, which will support the gradual transformation of the use of means Transport that depends on electricity and natural gas, in order to keep pace with global progress in the automotive industry and preserving the environment, in addition to strengthening the state's efforts to expand strategic projects with a social, economic and environmental dimension, which aim to reduce burdens on citizens.

The Spokesman for the Presidency of the Republic stated that the meeting dealt with reviewing the project of manufacturing industrial production machines with automatic digital control technology.

The President directed the acceleration of the implementation of the project, which will support the state’s strategy to bring about a qualitative leap in the field of local manufacturing, and to acquire the technological capacity in the digitized industry, with its production lines based on artificial intelligence and information technology. He also directed to pay attention to human resources training programs, to provide high-level technical cadres capable of absorbing this modern technology, which is the basis of advanced industry in the current era.

The meeting dealt with the presentation of the relevant authorities of the project of manufacturing programmed digital control machines in all its aspects, in partnership with the oldest German and Japanese experience in this field, as well as a review of how to employ the results of this project to serve the objectives of industrial development in Egypt, and to achieve the greatest possible benefit from these modern machines, especially In expanding the national system of small and medium enterprises for industrial production, supporting the feeding industries, and enhancing the activity and efficiency of new industrial complexes and specialized industrial cities at the level of the Republic, with the participation of all concerned parties, especially the Ministries of Trade, Industry and Military Production and the Arab Organization for Industrialization.