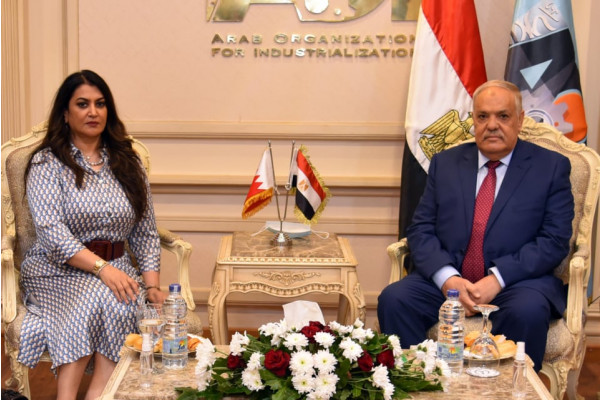 Lieutenant General "Abdel Moneim Al-Terras", Chairman of the Arab Organization for Industrialization, received Sheikha "Fajr bint Ali bin Rashid Al Khalifa" Chairman of the Sustainable Development Committee of the Federation of Arab Investors in the Kingdom of Bahrain and owner of Fajr Foundation for Self-Development and Sustainable Development, Dr. Hoda Yessi, President of the Arab Women Investors Federation; And this is on the sidelines of the Arab-African Investment and International Cooperation Conference and Exhibition, which was held from 2 to 5 November 2020, and its works were inaugurated by the League of Arab States and its sessions from the city of Al-Jalalah.

The meeting discussed ways of joint cooperation between the Arab Organization for Industrialization and the Kingdom of Bahrain through the Federation's Sustainable Development Committee in Bahrain.

The industries and products of the Arab Organization for Industrialization, which represents the citadel of Egyptian national industry, were also identified, particularly the civil and medical industries.

The Arab Investors Union delegation visited the Academy for Technical and Vocational Training of the Arab Organization for Industrialization, where they were briefed on the latest human cadres training systems in accordance with international quality standards.

The "Terrace" stressed that economic partnerships and alliances between countries and peoples are one of the pillars, if not the most important of them, in achieving growth and prosperity for our peoples in Egypt, the Arab region and the African continent, which is rich with all opportunities and potentials for growth and prosperity.

He added that the Commission’s participation in the Arab Investors Federation Conference; It meets the goals and objectives of the Arab Organization for Industrialization, which today passes more than 45 years to be an Arab industrial shield in all areas of production.

Al-Terras explained that, after 20 years of transferring the ownership of this organization to Egypt in its entirety, it had all the elements of the ability to be a partner in the industry in all its fields ... a partner who creates ... develops ... develops, trains and qualifies Egypt to be a major player in development at home. And abroad, and through 12 factories, some of which are 100% Egyptian, and some of them are in full cooperation with major international companies to be the largest industrial back for Egypt and all Arab and African countries.

He also indicated that the meeting confirms that our factories are open, our trained and qualified human competencies, and our accumulated experiences; All this is available so that we may enter into partnerships with our Arab brothers, at the forefront of which is the sisterly Kingdom of Bahrain and Africans ... especially since everyone sees with their own eyes that since President Abdel Fattah El-Sisi took over the leadership of Egypt and passed through it from dispersion to alignment ... and from chaos to stability. The Arab nation and the African continent are given unlimited attention to break down barriers and borders to form an economic, industrial and service conglomerate

At the conclusion of the meeting, Sheikha presented "Fajr bint Ali bin Rashid Al Khalifa"; Appreciation Shield for Lieutenant General "Abdel Moneim El-Terras"; Within the framework of its generous sponsorship of the Arab-African Investment and International Cooperation Conference; Also on the occasion of his support for Egyptian and Arab women and the achievement he has achieved in the name of Arabs and Egypt in the industrial sector and industrial training on the latest technological technologies