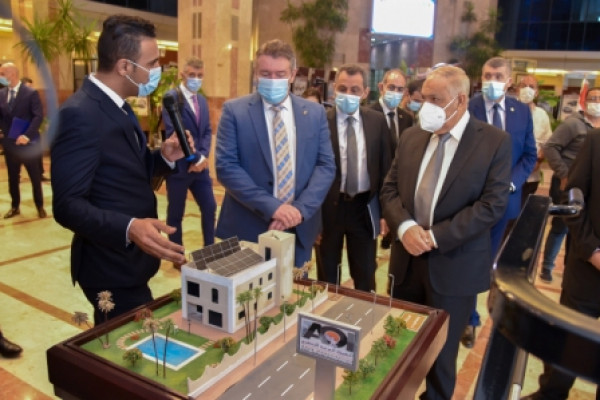 lieutenant-General Abdel Moneim El-Terras, Chairman of the Arab Organization for Industrialization, received Mr. Julian Christian, Deputy Minister of the Ministry of Economy, Energy and Business Environment, representatives of the Ministry of Military Production in the State of Romania, in addition to the accompanying delegation from major Romanian companies, including the companies "Rum Arm" and "Antares" and a number Of the other companies, and in the presence of Ambassador "Mihai Stefan Stopparo", Ambassador of Romania in Cairo.

This visit comes within the framework of strengthening all aspects of cooperation and joint industrialization in light of the current investment climate in Egypt and Romania's presidency of the Black Sea Organization for Economic Cooperation.

The meeting witnessed the presentation of the Arab vision for industrialization regarding deepening local industrialization, localization of technology and training of human cadres in cooperation with major Romanian companies in many different fields of industry, including defense and security industries, maintenance, information systems, electronics, digital transformation, optical fibers, electric cars, solar power stations, agricultural tractors and wooden furniture, to In addition to discussing the participation of Romanian companies in the national projects implemented by the state, including furnishing government headquarters in the new administrative capital.

At the end of the meeting, the Romanian companies were invited to form a technical team to visit the units of the Arab Organization for Industrialization to see the capabilities available on the ground and to identify the proposed aspects of cooperation between the two sides in the various fields of industrialization, in addition to discussing the participation of Romanian companies in the International Security and Defense Exhibition, IDEX in its new session. Coming in Cairo, where it is an opportunity to achieve joint benefit from global expertise in the fields of armaments and defense industries.

In this regard, the "Terrace" stressed the importance of implementing President Abdel Fattah El-Sisi's directives to increase investment opportunities in Egypt and localize technology in cooperation with international expertise, pointing to the importance of investing in the depth and strength of relations between "Cairo and Bucharest" through the Egyptian-Romanian Committee and how to benefit from them to open horizons. New for joint cooperation in various fields of industrialization according to the latest systems of the Fourth Industrial Revolution.

He added that the Arab Organization for Industrialization is looking forward to strengthening joint cooperation with major Romanian companies, to deepen local manufacturing and increase the added value in the local industry, pointing to the discussion of increasing competitive opportunities for marketing joint production in the Egyptian, Arab and African markets, as well as the possibility of exporting these products to African countries by taking advantage of the agreements. Commercial and free trade zones such as "COMESA", which are considered promising markets for all the planned products participating in their manufacture in Egypt, and which can be considered a starting point for Africa and the surrounding countries to market products to them.

In a related context, the "terrace" discussed with the Roman side the return of the Romanian agricultural tractor production with modern specifications and studied the possibility of manufacturing it in Egypt to meet the local market and export to Africa and Europe.

The Romanian delegation visited the product exhibition and the Arab Organization for Industrialization Academy for training, where "Julian Christian" expressed the importance of activating cooperation with the Arab Organization for Industrialization in various industrial fields as it is the largest industrial entity in Egypt and the African and Arab region, pointing to the importance of encouraging major Romanian companies to invest in Egypt. In various fields, especially in light of economic reform policies, new development projects and the new administrative capital project.

Christian also explained that the Romanian economy is witnessing a rapid development due to cooperation with the European Union and the development of industry in it based on advanced European technology, referring to the Arab Industrialization invitation to visit Romanian companies to exchange experiences and training.

In turn, Gabriel Totsu expressed the aspiration of the "Rum Arm" company to open new horizons for investment and strengthening cooperation and joint manufacturing with Egypt, praising the industrial and technical capabilities of the Arab Organization for Industrialization and the richness and diversity of its defense and civil products. This is what we saw closely during our participation in the IDEX International Defense Exhibition, which was held In Cairo at the end of 2018.

"Tootsu" pointed out that the Romanian side's interest in cooperating with the Egyptian side comes within the framework of transferring and localizing technology and training to achieve a long-term strategic partnership, praising the efforts of the Arab Company for Industrialization to deepen local industrialization and localize technology according to international quality standards.

Mihai Stefan Stobaru also explained that Egypt is a historical and strategic partner of Romania and that there is an ever-developing economic cooperation between the two countries, pointing to the keenness of Romanian companies to establish new long-term joint partnerships with Arab Manufacturing in all fields of industry, training of human cadres and discussing participation in the implementation of national development projects. The grand building is in accordance with international quality standards.