The discussions of the Minister of Immigration, the Chairman of the Arab Organization for Industrialization, and the global expert, Hani Azer, with a German international company

Home - news - The discussions of the Minister of Immigration, the Chairman of the Arab Organization for Industrialization, and the global expert, Hani Azer, with a German international company

The discussions of the Minister of Immigration, the Chairman of the Arab Organization for Industrialization, and the global expert, Hani Azer, with a German international company 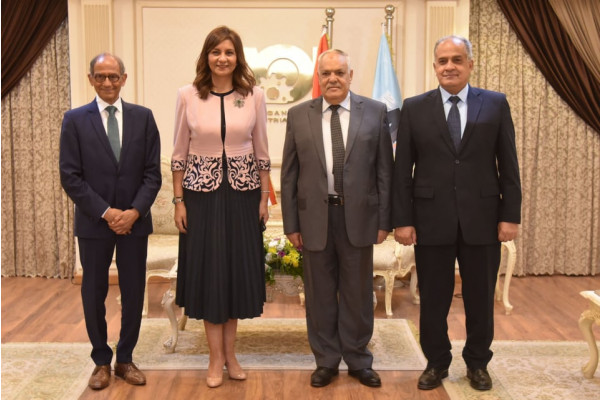 Lieutenant-General, "Abdel-Moneim Al-Terras", head of the Arab Organization for Industrialization, Ambassador "Nabila Makram", Minister of Immigration and Egyptians Abroad Affairs, and engineer "Hani Azer" the international Egyptian expert advisor to the President of the Republic for engineering industries, discussed with the German company ElringKlinger, which is one of the largest companies for car suppliers And in the presence of the Chairman of the Board of Directors, Dr. Stephen Wolf, and his deputy for the batteries and electric vehicles department, Mr. Deichmann, and his deputy for sales and production lines, Mr. Schweizer, and the engineering consultant in the company, and one of our experts in Germany, Dr. Eng. Murad Lutfi, via video conference technology, with the aim of deepening local manufacturing and localizing battery industry technology. Electric cars as part of the fourth generation technology (or the fourth industrial revolution).

These discussions come within the framework of strengthening the state’s initiative to expand the electric car industry, and investing in the positive results of the “Egypt Can Industry” conference, which discussed ways to localize cars with environmentally clean energies, according to the latest global industry systems.

During the talks, the Arab Industrialization vision was presented regarding the deepening of local manufacturing and the transfer and localization of the latest technology in the electric battery industry, including the training and preparation of skilled human and technical cadres in this specialized industry, according to the mechanisms of the Fourth Industrial Revolution, by benefiting from the advanced expertise of the German International Company.

In this regard, Ambassador Nabila Makram expressed her appreciation for the national role played by the Arab Organization for Industrialization, as the largest industrial backer of the state, and its participation in the implementation of national development projects, and the realization of the state's plan to deepen local industrialization and localization of advanced technology and the return of the Egyptian national industry to its leading role in the Arab and African region.

Makram explained that the success of the "Egypt Can with Industry" conference in its new session comes in line with the vision of the political leadership, which is concerned with the localization of the industry, noting that it was discussed to deepen the manufacture of batteries for electric cars of various types, taking advantage of the advanced industrial base in Arabic for industrialization, within the framework of an initiative The state to expand the electric car industry.

In a related context, Makram praised the racing of Egyptians abroad to share their homeland's concerns and issues, and their willingness to offer their expertise and experiences to Egypt, in a way that ultimately serves the goals and priorities of the sustainable development strategy and the vision of "Egypt 2030".

For his part, the "Terrace" stressed the importance of implementing the directives of President "Abdel-Fattah El-Sisi" to enhance the fields of creativity and launch into future horizons, by taking advantage of national human energies and communicating with the brilliant people of Egypt locally and internationally, to localize the latest production technologies and modern manufacturing systems.

Al-Terras expressed its appreciation for the efforts of the Ministry of Immigration and its support to increase the role of Egyptian experts abroad in all national projects and to link Egyptian investors and Arab brothers to their greater homeland, praising the advanced technical expertise of ElringKlinger.

The "Terrace" indicated that the localization of battery manufacturing technology for electric cars was discussed, within the framework of the state's plan to expand the electric car industry, pointing out that we aim to transform Egypt into an advanced regional center for the manufacture of electric car batteries, to meet the needs of the local market and export to the African and Arab region.

He added that it was agreed to form a joint committee to study the technical aspects of manufacturing batteries of all kinds, taking advantage of the advanced industrial base in Arabic for manufacturing.

In turn, Engineer "Hani Azer" praised the role of the Ministry of Immigration in linking Egyptian experts abroad to the homeland, pointing to the willingness of all immigrant minds to give unlimited giving to Egypt.

Azer also expressed his appreciation for the role of the Arab Organization for Industrialization as a strong national industrial backer for the state to implement Egypt's Vision 2030 and the Egyptian industry's entry into the stage of digital transformation and advanced fourth-generation industries, stressing that the advanced industrial base in Arabic for industrialization is capable of localizing the technology of manufacturing electric batteries with advanced technologies.

Officials of the German company ElringKlinger also praised the recent successes achieved by Egypt in all fields, which attracted the attention of giant international companies, including German, to enhance joint cooperation, expressing their aspiration to enhance cooperation with the Arab Organization for Industrialization and its advanced technological capabilities to localize the technology of the electric battery industry and expand the electric car industry.

The German company officials emphasized that Egypt is a regional center and a promising market to meet the increasing demand for electric batteries for the local market and for export to the African and Arab regions.