The Arab Organization for Industrialization receives the Russian ambassador 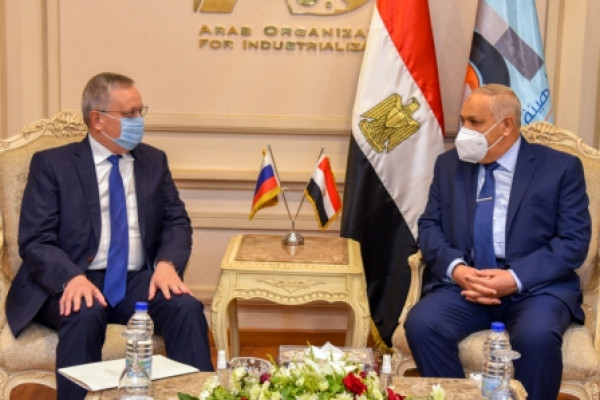 Lieutenant General Abdel Moneim El-Terras, Chairman of the Arab Organization for Industrialization, received Mr. Georgi Borisenko, the Russian ambassador in Cairo, in the presence of Major General Doctor Bahaa El-Din Zidan, Chairman of the Board of Directors of the Egyptian Consolidated Procurement Authority.

During the meeting, the Arab Industrialization vision was presented on deepening local manufacturing and transferring and localizing technology in many different fields of industry.

In this regard, the "Terrace" emphasized the importance of investing in the depth and strength of relations between Cairo and Moscow, and how to benefit from them to open new horizons and enhance joint cooperation in the various fields of manufacturing between the Arab Organization for Industrialization and major Russian companies.

The "Terrace" stressed the importance of implementing the directives of President "Abdel Fattah Al-Sisi" to localize the technology of the medical and pharmaceutical industries in cooperation with international experiences, referring to the research and study of the Russian vaccine production "Sputnik 5" to treat the emerging corona virus and to make it available in the Egyptian drug market, after conducting clinical trials and medical tests. Necessary to ensure the safety and security of citizens' health.

The "Terrace" indicated that Arab Industrialization is working to make optimal use of all available technological and human potentials to transfer and indigenize advanced technologies in friendly countries, especially Russian companies, to develop Egyptian industry methods and systems and train human cadres according to the systems of the Fourth Industrial Revolution.

For his part, "Borisenko" praised the enormous capabilities of the Arab Organization for Industrialization, which encourages Russian companies to cooperate and exchange experiences among them, stressing that Egypt is a historical and strategic partner of Russia, and from this standpoint we look forward to producing the Russian vaccine and providing it to the Egyptian market in cooperation with Arab Industries for industrialization.

He added that this visit also aims to discuss new partnerships between Russian companies and the Arab Organization for Industrialization in all areas of industry and training of human cadres.

In a related context, the Russian ambassador in Cairo explained that there is continuously developing economic cooperation between the two countries, praising the Egyptian government's plans to confront the new Corona virus, comprehensive economic reform programs, and the achievements made by Egypt during the past 7 years under the leadership of President "Abdel Fattah El-Sisi", pointing to the concern of companies The Russian Federation and its aspiration to participate with the Egyptian industrial institutions to implement major national projects in accordance with international quality standards.

For his part, Major General Doctor Bahaa El-Din Zidan explained that the Unified Purchase Authority has played an effective role during the last period to secure the country's needs of medical supplies and devices during the period of the Corona virus, stressing the importance of making use of the advanced industrial base in the Arab Organization for Industrialization to transfer and localize the technology of medical industries. According to the requirements of the World Health Organization.