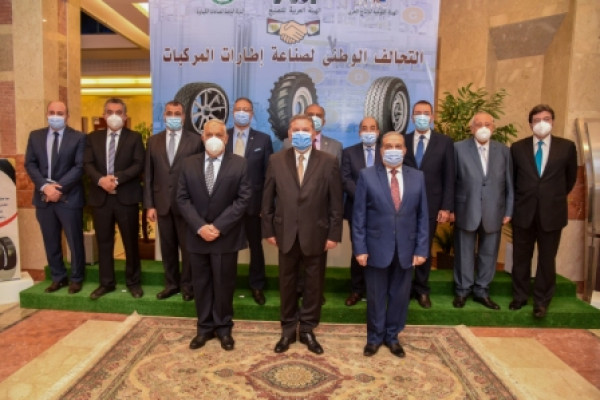 Mr. Hisham Tawfiq, Minister of Business Sector and Engineer Mohamed Ahmed Morsi, Minister of Military Production, and Lieutenant General Abdel Moneim El-Terras, Chairman of the Arab Organization for Industrialization, witnessed the signing of a framework agreement for cooperation between the Holding Company for Chemical Industries of the Ministry of Public Business Sector, the National Authority for Military Production and the Arab Authority For manufacturing.

The signing of the agreement comes within the framework of integrating the efforts of state institutions to implement ambitious development plans, in accordance with Egypt's Vision 2030.

In this regard, Minister Hisham Tawfiq emphasized that this agreement comes in light of a common vision between the Ministry of Business Sector, the Ministry of Military Production and the Arab Organization for Industrialization to unify efforts and achieve integration in the tire industry and revive and deepen this industry locally in accordance with international quality standards, indicating that the optimal path for development must be To be a concerted effort and investment of all capabilities of our national institutions.

The Minister of Business Sector praised the industrial capabilities of military and Arab production for industrialization to deepen local industrialization, transfer and localize global technology, stressing that the signing of this memorandum is a step to unify all efforts concerned to promote the national industry and create a distinctive brand for the Egyptian product.

He added that the signing of the agreement is a step in the right way to promote such types of local investments and to provide national products to global markets, as part of the Ministry's efforts to restructure the Transport and Engineering Company of the Chemical Holding Company, to meet the needs of the local market and replace imports of tires in addition to exporting abroad.

The Minister of State for Military Production also clarified that the signing of this contract reflects cooperation and integration between "Military Production" and the various industrial entities in the country, including the Ministry of Business Sector and the Arab Organization for Industrialization, adding that cooperation with Arab Industrialization will extend to multiple fields to provide all the needs of the current national projects and development in the country and the development of industry by The way of cooperation with major international companies.

He also stressed the ministry's utmost keenness to direct the manufacturing, technical, technological and human capabilities available to the companies and its units to implement the various national projects in the country that benefit the citizen and the country's national economy.

Minister Morsi also pointed out that establishing a factory to manufacture tires with this size of production is a vital national task to meet the needs of the armed forces and reduce importing tires to various civilian agencies, which will positively affect the provision of foreign currency and the strengthening of the Egyptian economy.

For his part, "The Terrace" stressed the implementation of President Abdel Fattah El-Sisi's directives to strengthen constructive cooperation between state institutions and exploit national manufacturing capabilities, noting the importance of strengthening efforts to deepen local industrialization, transfer and localize modern technology and work to reduce imports, in a way that contributes to increasing the added value of products. Egyptian.

Al-Terras explained that it was agreed to establish a strong national industrial alliance to manufacture vehicle tires of all types, including passenger cars, transport, buses, agricultural tractors and heavy equipment, referring to the establishment of a vehicle tire factory in the Suez Canal Economic Zone in Ain Sokhna on an area of ​​450,000 square meters.

The "Terrace" emphasized the use of the latest scientific, chemical and technological solutions to establish the factory, explaining that this cooperation provides many job opportunities for young engineers and technicians and training on the latest technology according to the standards of the Fourth Industrial Revolution.

He also praised the efforts of the Ministries of Business and Military Production to deepen local manufacturing and transfer and localize global technology, stressing that the signing of this memorandum is a step on the right path for Egypt to become a regional center for the manufacture of car tires to achieve self-sufficiency for the Egyptian market in accordance with the standard specifications of the Egyptian Standards and Quality Authority and then open new markets for export. For Arab, African and European countries with the highest international quality standards.

In turn, the accountant, Imad al-Din Mustafa, explained that the optimal path for development must be through concerted efforts and investing all the capabilities of our national institutions, especially the military and Arab production for industrialization, as they have a huge industrial and technological base that enables them to play a vital and influential role in designing and manufacturing products and components that are imported. From the outside, which is reflected positively on the support of programs to deepen local manufacturing and revive the tire industry for various types of cars and uses.

In a related context, through video conferencing, a contract was signed to assign one of the major consulting firms based in France to prepare marketing, financial and economic feasibility studies for the auto tire project. It was also agreed to cooperate with Black Donuts, one of the largest consulting firms specialized in the manufacture of vehicle tires. To prepare studies for establishing tire production lines according to international quality standards.