The Arab Organization for Industrialization receives the Ambassador of South Korea 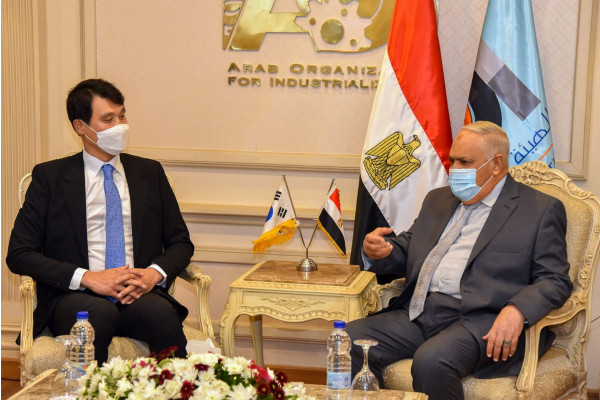 In a visit that reflects the strength of the growing Egyptian economy and the confidence of major investors and international companies in the efficiency of our giant national institution, Lieutenant General  Abdel Moneim El-Terras, Chairman of the Arab Organization for Industrialization, received Ambassador Hong Jin-wook, the Ambassador of South Korea in Cairo.

The talks dealt with the industrial capabilities in the Arab industry for industrialization and the expertise of the South Korean industry in the field of electronic industries and digital transformation in the field of education, software, communications, information technology, tablets, interactive screens, medical industries, membranes manufacturing, seawater desalination plants, renewable energy, subway cars, environmentally friendly means of transport, and other fields. Multiple manufacturing.

The vision of the Arab Organization for Industrialization regarding deepening local industrialization, transfer and localization of technology, and training of human cadres through cooperation with major Korean companies and identifying mechanisms for enhancing cooperation in many different fields of industry was also presented.

In this regard, the "terrace" explained the importance of investing in the depth and strength of relations between Cairo and Seoul and how to benefit from them to enhance joint cooperation in the various fields of industrialization. Investment opportunities in Egypt.

He added that the Arab Organization for Industrialization is looking forward to partnering with major South Korean companies, with which we have distinguished cooperation since the establishment of the organization, stressing the importance of strengthening cooperation in the industrial field in order to make use of advanced Korean technology and industrial capabilities available in the authority to maximize the proportions of the local component and increase the added value The local industry, in addition to discussing the possibility of South Korean companies participating in the national projects implemented by the state, including modifying obsolete cars, especially microbuses, and converting them into environmentally friendly cars using natural gas, praising the Korean vehicles that are distinguished by quality and durability specifications, pointing to achieving the appropriate price for the Egyptian market and the possibility of export To African countries.

For his part, Hong Jin Wook stressed that the Egyptian market attracts Korean investments and is of strategic importance to the Arab and African region, pointing to the keenness of major Korean companies and Korean businessmen and their aspiration to participate with Egyptian industrial institutions to implement major national projects in accordance with international quality standards.

He added that the governments of the two countries are working closely to discuss and study the possibility of concluding a free trade agreement between them to establish a framework for comprehensive economic cooperation.

"Wook" also indicated that the major Korean companies, including Samsung and Hyundai, are keen to open up, cooperate and establish partnerships with the "Arab Industrialization" to transfer and localize modern technology and train human cadres in various fields of industry.

The Korean ambassador praised the pivotal role the authority plays in introducing the latest production technologies and developing them in accordance with international quality standards, pointing out, for example, that the global Korean Hyundai Rotem is keen to invest in Egypt and cooperate with the Arab Organization for Industrialization, noting that Hyundai has strict quality requirements, which are achieved in Arabic For manufacturing