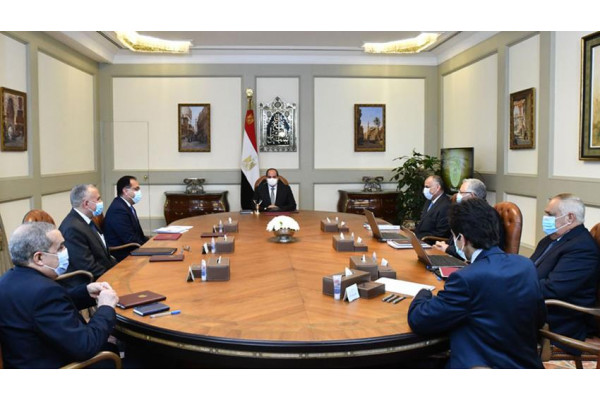 The official spokesman for the Presidency of the Republic, Ambassador Bassam Rady, said that the meeting dealt with "following up the development of the irrigation water management system in agricultural lands by relying on modern and smart means."

The president was briefed on the efforts to establish the smart irrigation system, which is one of the most recent agricultural irrigation techniques in the world, by producing sophisticated sensor devices to measure the moisture level in the soil with high accuracy, thus achieving multiple benefits, the most important of which is increasing the crop productivity of agricultural lands, saving quantities of fertilizers used, as well as irrigation water, And then double the income of rural families.

The President directed the provision of these devices at reasonable prices and quantities to be accessible to farmers, in coordination between the Arab Organization for Industrialization and the ministries of irrigation, agriculture and military production.

The system of modern irrigation methods in its various aspects has also been reviewed, which also aims to raise the efficiency of water use, develop field irrigation systems and increase agricultural productivity at the level of the Republic, while presenting various financing alternatives in this regard.

The President directed to ensure all the success factors and merit of the implementation mechanisms to modernize and develop irrigation systems at the level of the Republic, by integrating with the various efforts of the state aimed at raising the efficiency of irrigation water management and reducing transmission losses, especially the national project for lining canals and raising the efficiency of sub-water channels.

The President also directed that importance be given to training farmers in the operation and maintenance of modern irrigation systems, through the extension programs provided by agricultural societies, as well as strengthening media awareness programs directed to farmers and rural families to introduce the benefits and returns of modern and smart irrigation systems.