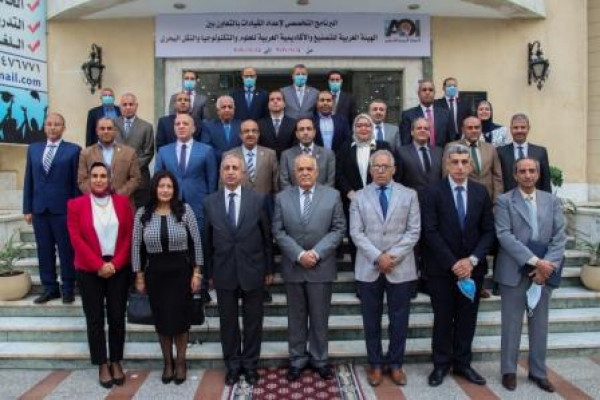 In this regard, "The Terrace" affirmed that Arab Industrialization has developed an ambitious and clear plan to train, qualify and develop human cadres in all disciplines according to the latest administrative training systems, indicating that this program takes place at the headquarters of the Arab Institute for Advanced Technology of the Authority, in partnership between the Arab Academy for Science, Technology and Maritime Transport

The National School of Administration of France (L'Ecole Nationale D’Adminstration)

He added that the Arab Organization for Industrialization recently held serious partnerships with major international companies in all areas of industrialization of global standing, and therefore the importance of investment was necessary to develop the managerial and leadership skills of the human cadres of all units of the organization.

The "Terrace" explained that the training program was prepared through scientific axes prepared in accordance with the latest international standards and in line with the strategic plan of the state, indicating that the training is a window overlooking the sciences of tomorrow and contributes strongly to building a person capable of leadership to achieve sustainable development in accordance with Egypt's Vision 2030.

He pointed out that the program is being implemented within the framework of refining the skills of the first grade of the authority’s leaders, building the skills of the second grade and qualifying them to lead in the units of the Arab Organization for Industrialization, as it is one of the most important castles of industry in Egypt and the Arab world.

The graduation ceremony witnessed the delivery of Lt. Gen. Abdel Moneim Al-Terras, Chairman of the Arab Organization for Industrialization, and Dr. Ismail Abdel Ghaffar, President of the Arab Academy for Science, Technology and Maritime Transport, certificates to 16 graduates of the program from the leaders of the Arab Organization for Industrialization, noting that the main axes of the program It covered the fields of politics, economics, law, sociology, information and communication technology, media, governance, management, and personal skills.