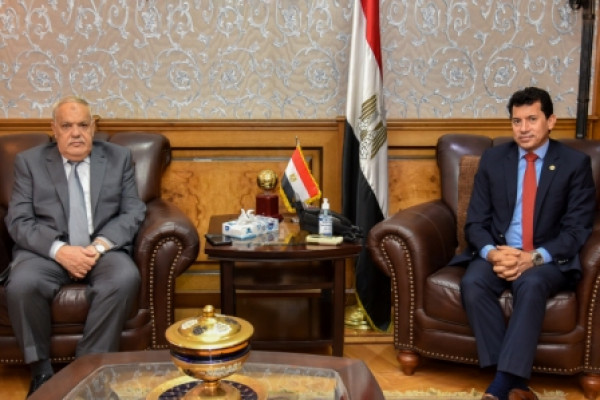 During the meeting, Dr. Ashraf Sobhi, Minister of Youth and Sports, confirmed that 7,600 bicycles will be received as part of the "Your Bike ... Your Health" initiative from the Arab Organization for Industrialization during the coming period, indicating that this initiative is consistent with the vision of the political leadership and the directives for adopting initiatives to preserve the health and fitness of citizens. Physical fitness, expanding the base of sports practice for various sports in all cities and villages of the governorates of the Republic, and making it a way of life for the Egyptian citizen.

Sobhi pointed out that the Ministry of Youth and Sports began to immediately implement the mandates of His Excellency President Abdel Fattah El-Sisi to expand the introduction of bicycles through the initiative “Your bike ... your health,” and to find ways to develop it to suit all needs, whether sports practice or long-distance travel, in addition to its returns. Strong on the health infrastructure of Egyptian youth, pointing out that the Ministry of Youth and Sports sought to reduce the burden on the Egyptian family to obtain a private bike through cooperation with Egyptian national banking institutions.

The Minister of Youth and Sports expressed his welcome to cooperate with Arab Industrialization, one of the castles of the national industry, praising its excellence in technical expertise and overcoming any obstacles to meet all the requirements of youth and sports facilities with the required efficiency and keenness to provide the highest levels of quality and speed.

For his part, Al-Terras confirmed that the Arab Organization for Industrialization puts all its manufacturing energies and technological capabilities to serve Egypt's youth through the Ministry of Youth and Sports, indicating that the authority is fully prepared to be an industrial back for the Ministry of Youth and Sports. He also indicated that the Authority is striving with all its strength to implement an initiative. President "Abdel Fattah El-Sisi" to place the bike on the map of the main means of transportation in Egypt and work to localize its industry locally and market it at a reasonable price and with payment facilities.

The head of the Arab Organization for Industrialization expressed his sincere appreciation to the Minister of Youth and Sports for the constructive efforts related to youth and sports and for the national initiatives that resulted in fruitful cooperation to develop the sports system, programs, projects and initiatives offered to youth in various fields.

The meeting dealt with the discussion of youth and sports projects pending between the ministry and the authority, which included 26 projects, including the youth city in Hurghada, Al-Saf youth centers and Heikstep, and it was agreed to complete and open them during the next period.

On the sidelines of the meeting, Dr. Ashraf Subhi, Minister of Youth and Sports, and Lieutenant General "Abdel Moneim Al-Terras", Chairman of the Arab Organization for Industrialization, inspected the fitness hall inside the General Office of the Ministry of Youth and Sports, which includes devices manufactured by the Arab Organization for Industrialization.